On the road in Bangkok with a Tuk Tuk.

If you think of Bangkok, you think of many things like food stalls and great food, monks and temples, the nightlife with many night markets and an exotic nightlife and you think of Tuk Tuks. To experience Bangkok, you have to tour the city, and Bangkok is huge. We have already reported on other public transport, no other is as much criticized as a Tuk Tuk ride. Critics say: Tuk Tuks are loud, a drive in the street sweeper is a dirty matter in the exhaust fumes, a ride is dangerous, some Tuk Tuk drivers are not honest, driving with the Tuk Tuk is overpriced. The driving pleasure you get for it, the disadvantages would not be worth.

Tuk Tuk have a distinctive sound

Exhaust fumes of road traffic. Yes that's true! In road traffic, exhaust fumes of cars and motorbikes develop. If you really want to compare it, then you will not be able to contradict critics. In a Taxi with its windows closed you will certainly not come in contact with car exhaust as much as when driving in a Tuk Tuk. The same point of criticism then affects all other road users such as motorbike riders, driving in buses (where the windows are usually open all the time), driving in a shared Taxi, which also drives open. If you would like to have it "clean", take the Taxi.

The potential danger of a Tuk Tuk ride. A Tuk Tuk is an open vehicle in which there are no seatbelts. Of course you do not use any means of public transport with the intention that a traffic accident could happen. You want to get from one point to another comfortably, quickly and safely. Seen in this way, you must certainly cut back on a Tuk Tuk ride, theoretically subject to a higher accident risk than with other means of public transport. A Tuk Tuk ride is often described as fast. The drivers should have their own driving style. That also seems to be correct, in the sometimes dense traffic the Tuk Tuk drivers are often more flexible and better off the road than others. To what extent one may call Tuk Tuk driver as speeder or the rides as fast, you have to judge for yourself.

Overpriced fares. As a rule, you should be aware of a basic rule as a Bangkok vacationer, tourists often get other prices for one thing, a commodity, a service offered, as locals. This can always happen if it is not a fixed price. A Tuk Tuk ride is such a thing. There is no taximeter like in a Taxi. For a ride, the driver is first talked about the destination and the driver gives his fare. This will be higher for tourists in most cases than for Thai. Is it unfair to ask for different amounts of money for the same service? Yes, it is. Tourists are "ripped off" all over the world. They pay excessive prices for souvenirs, they pay exorbitant prices for food and drink in certain places. This is a fundamental discussion with a moral aspect. If you want to follow this, you avoid the risk of paying too much for a Tuk Tuk ride and just choose the cheaper mode of public transport.

Tuk Tuk on the wrong road

Dishonest drivers are everywhere, even among the Tuk Tuk drivers. The dishonesty in the criticism refers primarily to the fact that the drivers do not keep what they promise you. Some Tuk Tuk drivers try to cheat passengers on a tour, promising a lower price, sometimes even a free ride. Tours are then made to certain shops where tourists should buy clothing, jewelry or other things. The shop owners sponsor the Tuk Tuk drivers. The recommendation can only be to tell the driver at the start of the journey clearly where you want to go and if a suggestion from the driver for a special tour should be rejected.

Tuk Tuk under the stroke

It often sounds more negative and complicated than it is. A ride on the Tuk Tuk may not be the cheap way to get around Bangkok, but it's one that can be fun. Unlike a ride in a Taxi, the ride in an open vehicle is just what makes Bangkok a little bit more intense.

In Bangkok there are still about 9000 Tuk Tuks, the number is decreasing. Driving with the Tuk Tuk is less and less used, driving with the BTS or Taxi is for many passengers thanks to the Air Condition more pleasant and cheaper from the fare. What remains is the driving pleasure, and also is considered by many critically. Nevertheless, even today, the many Tuk Tuks shape the cityscape of Bangkok.

In Bangkok there are about 9000 Tuk Tuks. Riding a Tuk Tuk is often more expensive than other means of public transport, but has its own charm. 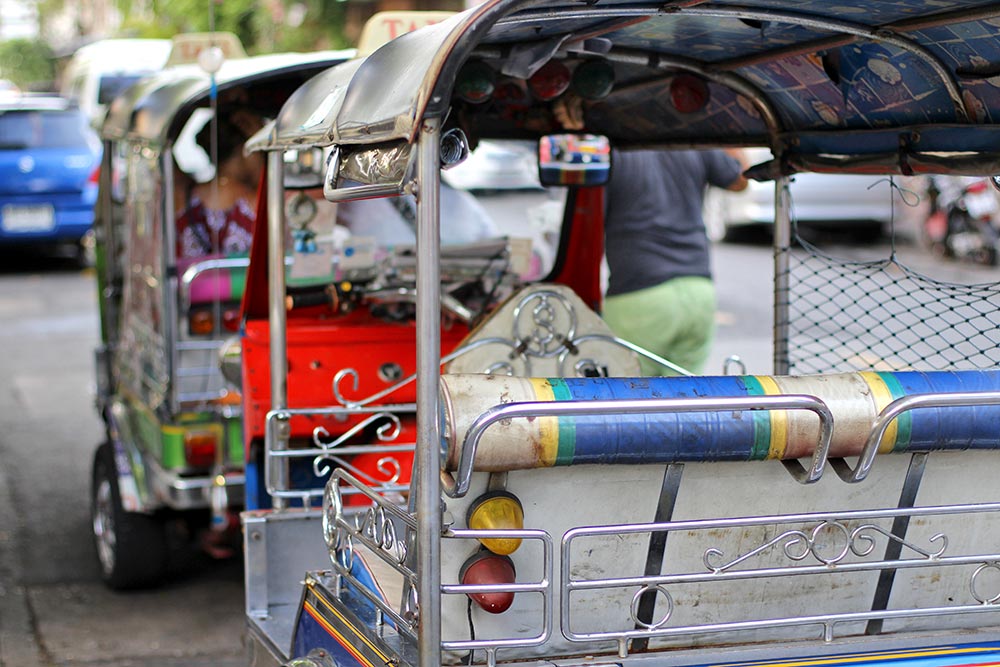 Tuk Tuk or not?
Many Bangkok attractions can not be reached directly by BTS or MRT, and you often have to walk for the rest of the way or choose another mode of public transport. With the Tuk Tuk you can get along very well in many situations.
Good and Bad things?
With hardly any other means of public transport so many points of criticism appear. With the open design of the Tuk Tuks you are in the traffic in the middle of the exhaust fumes. It is often the theoretical thought of exaggerated and on the other hand takes in a Tuk Tuk its surroundings more intense, can use a ride partly much better for many a snapshot.
Noise?
Some feel the engine noise of the Tuk Tuks as a crash. Other than a unique driving experience. Who would you agree with?
Safety?
There are no seatbelts in the Tuk Tuk, you should be aware of this when going on a ride. The drivers will certainly be very knowledgeable about the streets of Bangkok, after all they are doing their job since years of experiences. There is always an accident risk, with every means of transportation, the risk in a Tuk Tuk is theoretically higher. One thing to keep in mind as well: the open design makes you look outside. But you should avoid avoiding being out of control. In Bangkok, there are more motorbikes than Tuk Tuks and these meander in the traffic between the vehicles. So always look out for the motorbikes!
Not possible?
Tuk Tuk rides are designed for short and medium distances, for longer rides a Taxi is certainly better, or the combination of BTS and Tuk Tuk. The Tuk Tuks only drive in the city, they do not drive to the airport.
Your Experiences
Did you use the Tuk Tuk and did you get some more experiences or saw something great? You can tell us your experiences or if you want, you can even write your own blog!

On the road in Bangkok with a Tuk Tuk. 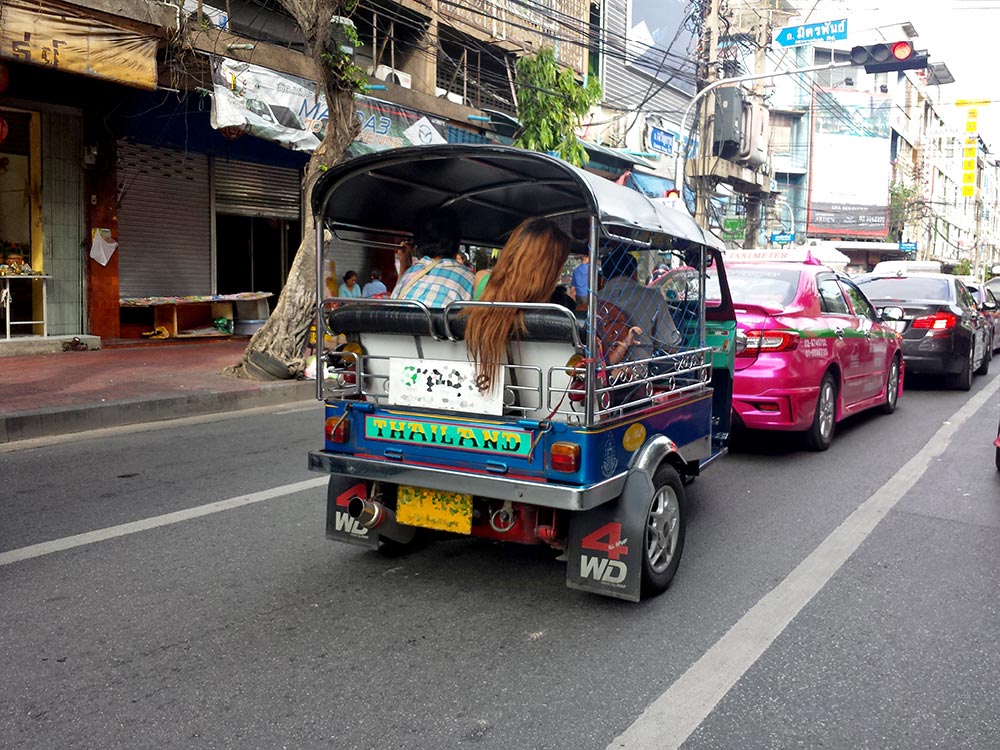 Drive with a Tuk Tuk

For a Tuk Tuk you have to wait at some places often and waits in vain. Many locals use a Tuk Tuk for short trips, because they can easily reach their destination. 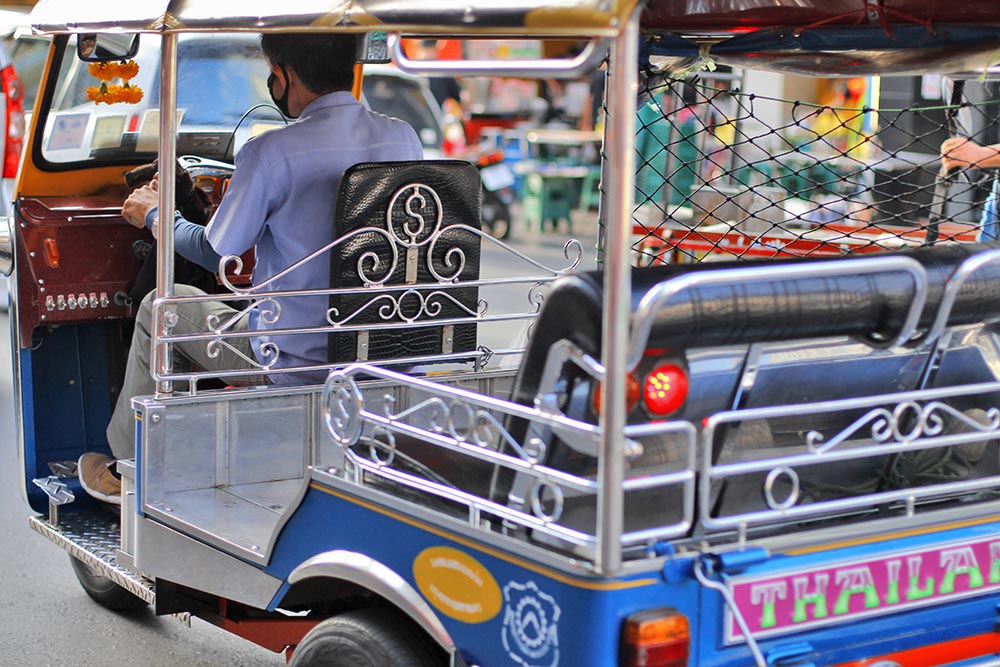 As a passenger, you sit in a Tuk Tuk on a bench behind the driver. It usually offers space for two to three passengers. One side is always open to get into a Tuk Tuk, while on the other side there is a net for protection on most Tuk Tuks. 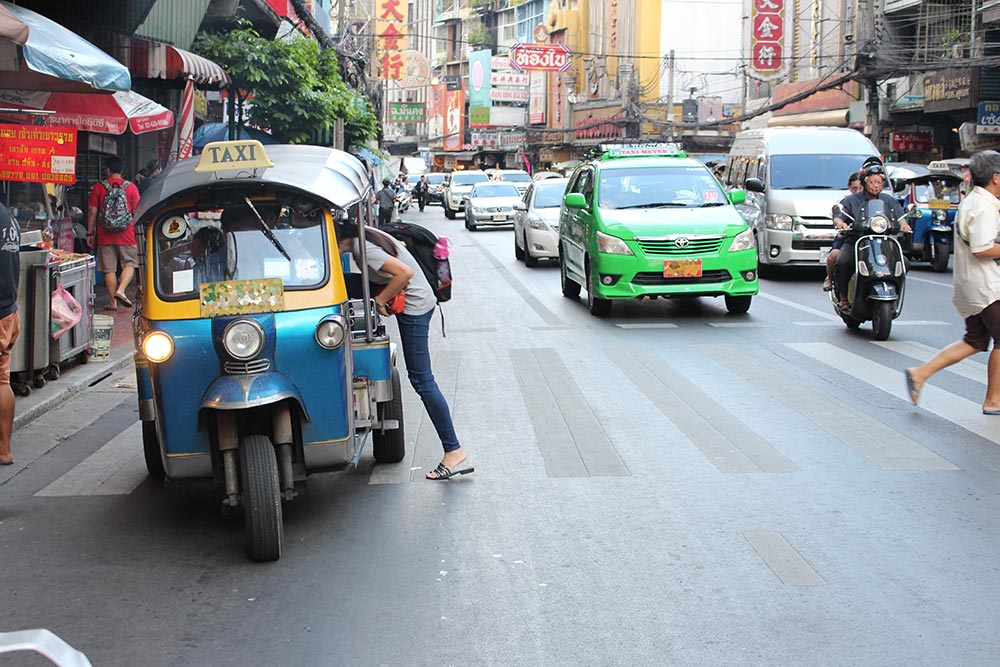 If you have not known before, you will be able to see it very quickly and be prepared for it. In Bangkok you drive on the left side of the street. This is getting used to, because you always fall back into your own habits. Tuk Tuks are almost everywhere, you always have to get in from the left side. Depending on where you stop a Tuk Tuk, always keep an eye on the rest of the traffic. 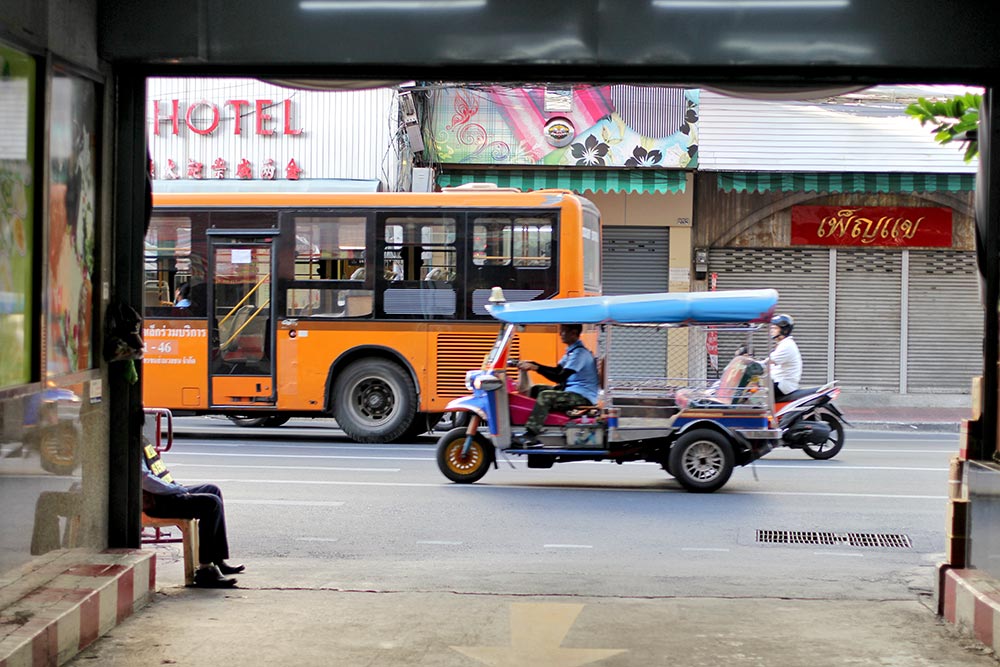 When it is raining...

...you get wet. This also applies to a ride on the Tuk Tuk. If only a few raindrops fall from the sky, you should usually be protected in Tuk Tuk. Often it pours out of all buckets and then shows the disadvantage in the open design of the Tuk Tuks. Depending on the strength of the rain, you will then get a few raindrops more.