Information about the Songthaew Taxis in Bangkok.

Useful Information about the Songthaew Taxis.

Bangkok uses a lot of different means of public transport and each has its advantages and disadvantages. Songthaew collective taxis are rather unconventional, they are converted pick-up trucks, whose cargo area is covered. On the back there are two benches on the side. The Songthaew collective taxis drive fixed routes, but unlike a public bus, the Songthaew shared taxis do not stop at fixed stations, but virtually wherever you want to get in and out.

A ride on a Songthaew Taxis is quite cheap, the fare is negotiated and paid before the trip.

The advantage of being able to get off at any point is a disadvantage at the same time, because new passengers can always be added. If you drive certain routes regularly, or if you are traveling in small groups, a Songthaew Taxi is an perfect means of public transport.

Driving Songthaew Taxis is quite convenient and can be an alternative to BTS, taxi or tuk tuk for many things. The disadvantage is that you first have to find out on which routes the Songthaew Taxis go. Not every driver speaks English, so that an agreement makes traveling little bit difficult. But if you have an approximate idea where you want to go, it can not hurt to question on the way there the next taxi that meets you and goes in that direction.

Fare?
The fare is negotiated with the driver before a ride and paid immediately. Of course you should know your destination. Not every driver speaks English, but that should not stop you from trying it, addressing the driver and naming your own destination, maybe it will fit.
Your Experiences
Did you use the Songthaew Taxis and did you get some more experiences or saw something great? You can tell us your experiences or if you want, you can even write your own blog!

Songthaew Taxis are easy to recognize, the pick up structure is distinctive. Driving is easy, you talk to the driver and you name your destination. If the Songthaew Taxi goes where you want, you pay according to the fare. Of course you can also ask the other way where the Songthaew Taxi drives. If you are a local guide, use the Songthaew Taxi for a trip and just get off at a certain location. In the songthaew taxi there are pushers like in a public bus. Stop is possible at any time. 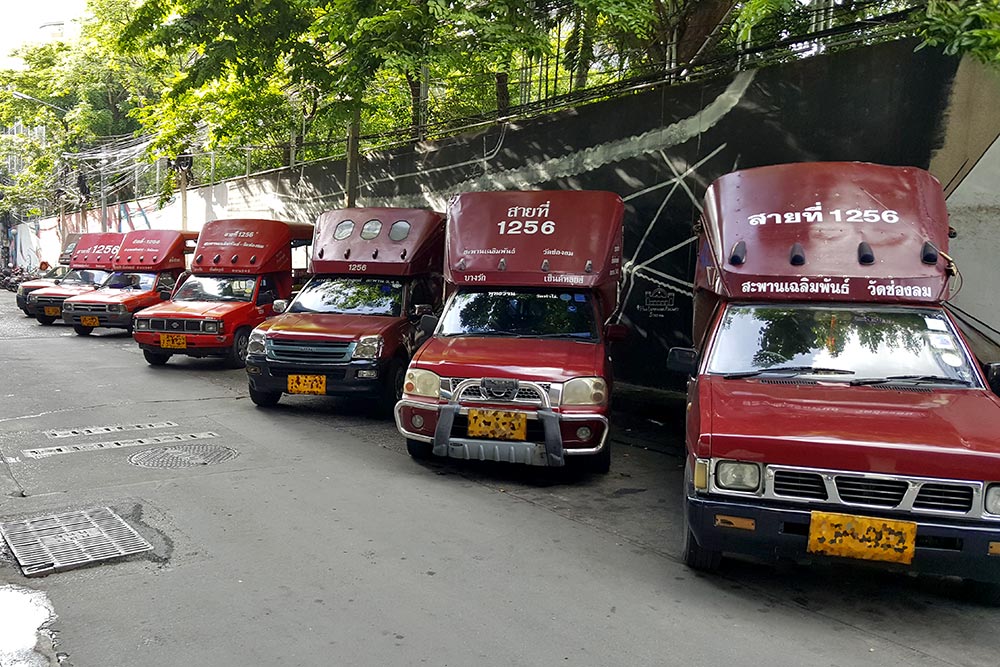 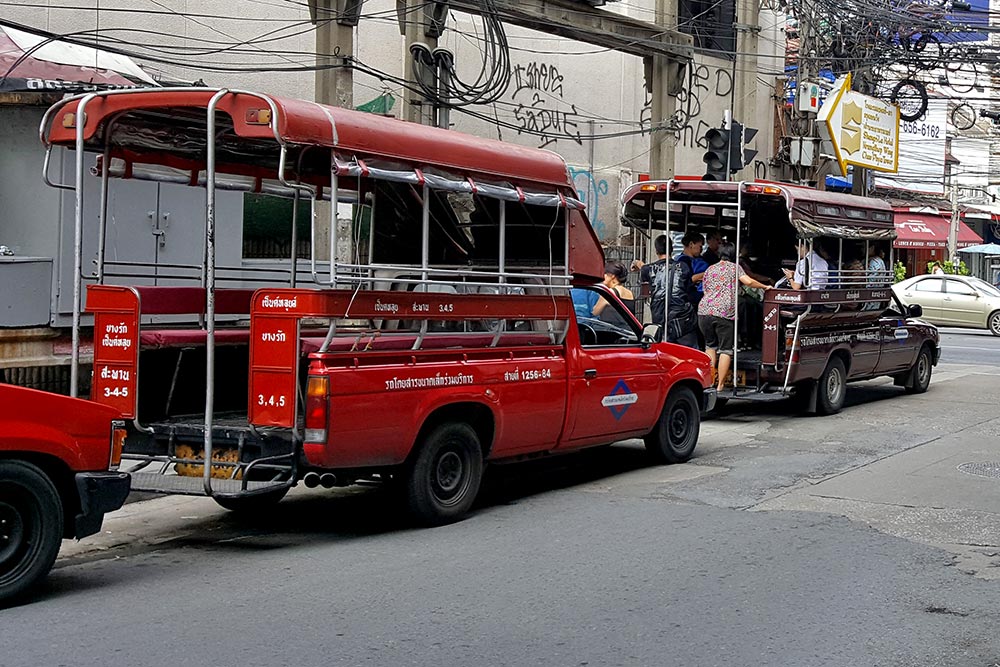 A Songthaew Taxi is useful in many situations and available from early in the morning till late in the night. 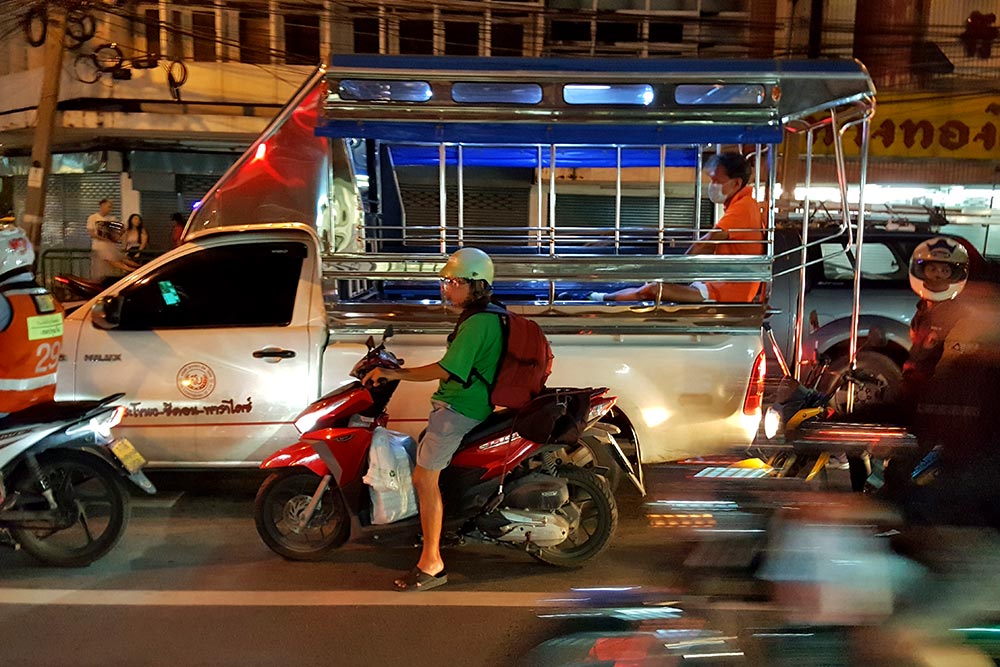 What would be unthinkable in our transport system is everyday life in Bangkok. The ride in a Songthaew Taxi can be quite relaxed. Of course there are two benches where you can sit down. Should it be full, then you have the opportunity to sit down at the entrance on the ground or to stand firmly on the poles as an experienced passenger. But you should do this only if you are absolutely sure that you can hold on tight enough, it looks easier than it is and if the Songthaew Taxi unexpectedly fast & jerky starts, you can quickly lose hold. 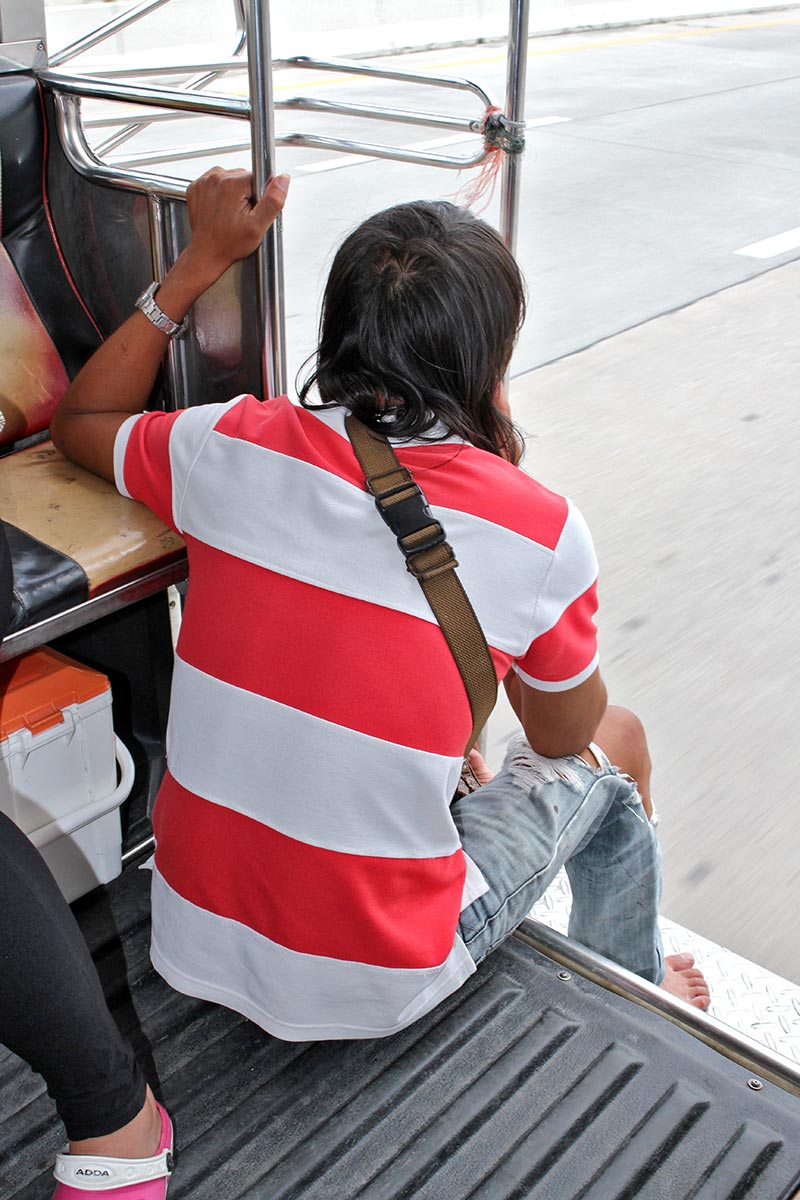