Information about MRT in Bangkok.

Inaugurated in 2004, the subway of Bangkok, the MRT Metro - Mass Rapid Transit Network, was opened in 2004 and is next to the BTS Skytrain the second public transport, with which daily crowds are moved. For more than a decade, there was only one route from Hoa Lamphong to Tao Poon, known as the Blue Line. Meanwhile, the blue line has been extended by a second stretch, the purple line. This runs from Tao Poon to Khlong Bang Phai.

The MRI is an ideal complement to the BTS Skytrain. With the BTS, a large part of the city center is already being used for traffic purposes. The metro also complements the route network in the city center and, in addition to relieving the entire traffic, leads with a route to the north-western part in the direction of Nonthaburi. The two current routes comprise 34 stops and another route, which will then receive orange as color, is under construction and is scheduled to be completed by 2022.

The vehicles of the MRT are very similar to those of the Skytrain BTS. Also, the barrier system for entering and leaving the driving range is similar to that of the Airport Rail Link system, so-called tokens are used instead of a ticket.

To drive with the MRT you need a ticket here too, who used to drive with the BTS, should remember that BTS and MRT are from different operators and both modes of transport use their own ticket system, which applies exclusively to their own line and not is transferable to the other system. Unlike the BTS, there are no single tickets on the MRT, but tokens for individual trips. Again, it has focused on a simple system and the fare is also aich according to the number of stops to be covered. If you drive often and often, you can buy a rechargeable prepaid card.

During peak hours (6:00am to 9:00am and 4:30pm to 7:30pm in the evening) it takes less than 5 minutes to get to the next MRT train. At the remaining times the waiting time until the next MRT is less than 10 minutes.

MRT and BTS are very similar, that is deliberately because the trains are from the same manufacturer. Nevertheless, there are two different means of transport and the tickets of MRT and BTS are not transferable. 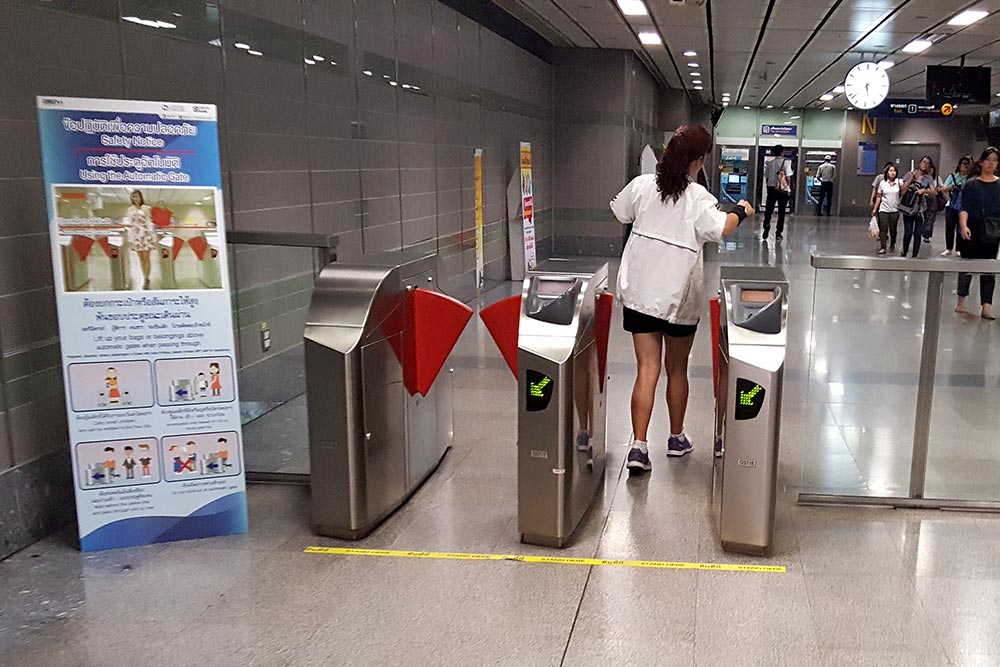 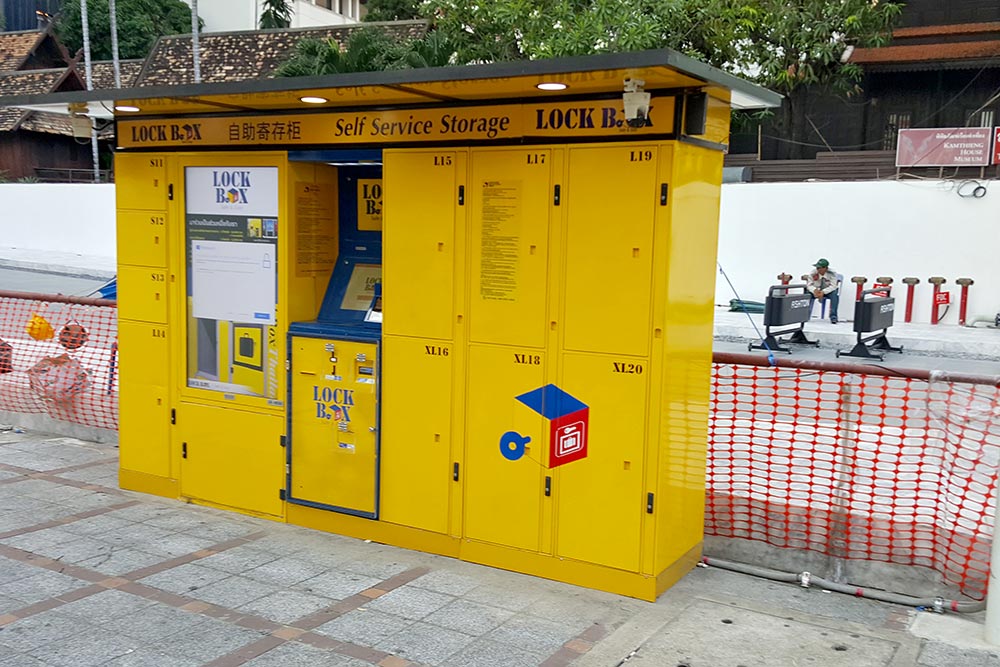 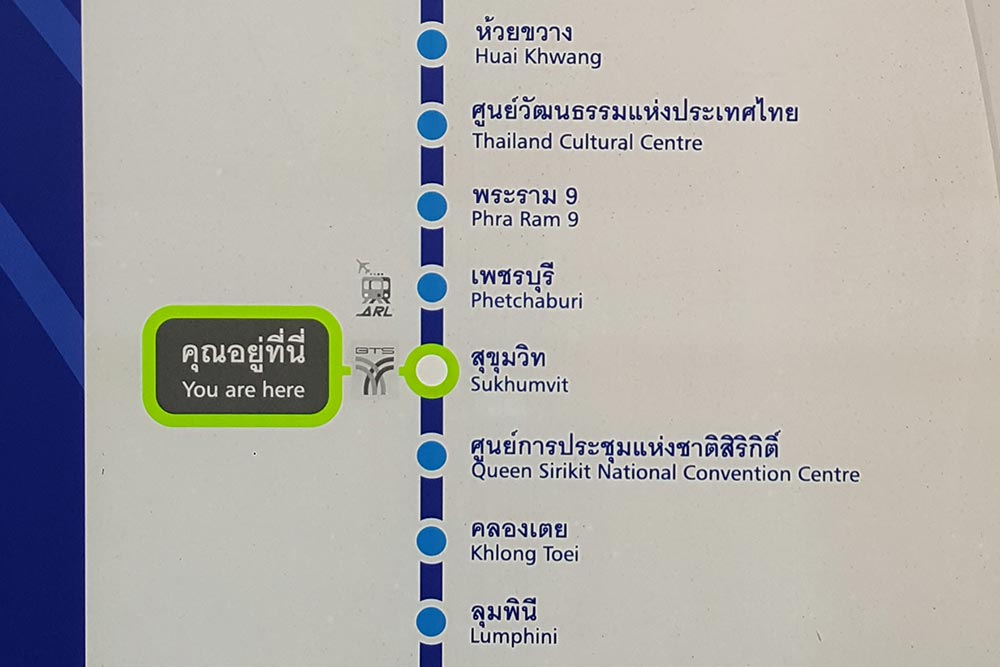 Ticket System?
One token is required per trip and per person, there are no group tickets. MRT and BTS belong to different operators, who wants to change from MRT to BTS, has to buy a new ticket for the BTS ride.
Route Planer?
Ii exists! Entering departure and destination shows you the possible connection: Route planner.
Drive often?
There are several prefabricated tickets and rechargeable tickets for frequent travelers, ranging from the One-Day-Pass for 120 Baht, or the 3-Days-Pass for 230 Baht to the 30-Days-Pass for 1400 Baht. If you want to be more flexible, you can buy an adult pass. This card can be charged with a certain amount and then devalued according to the normal fares. The balance that is still available at the end you can pay off.
Discounts?
Yes there is! For children, students and older people there are discounted tickets. For example, children who are less than 90cm tall can drive for free on MRI.
To the Airport?
Neither of the two airports is currently accessible by MRT. To Suvarnabhumi Airport drive to the BTS station Phaya Thai (Sukhumvit Line) and there change to the Airport Rail Link. If you want to go to Don Muang Airport, you can drive to the BTS stop Moh Chit and change there to the airport bus. Alternatively, take a taxi, which is just for a departure much more pleasant.
Operating Hours?
The MRT trains run from 6:00am to midnight, approximately every 10 minutes in normal operating hours, and every 5 minutes during peak hours.
Lost and Found?
It can happen that you lose or even find something in an MRT train. In both cases you can contact the station operator. Of course, you should hand in a lost property. If you have lost something, the necessary information is recorded. A lost property stays the first day at the station, then comes to the lost property office, where it can then be picked up. You will be informed about the state of affairs by SMS.
On Tour?
Some of the sights can not be reached directly by MRT, but at least part of the way there. The rest of the way you can easily access the other public transport, more specifically in the area attractions.
Your Experiences
Did you use the MRT Metro and did you get some more experiences or saw something great? You can tell us your experiences or if you want, you can even write your own blog!

Drive with the MRT. 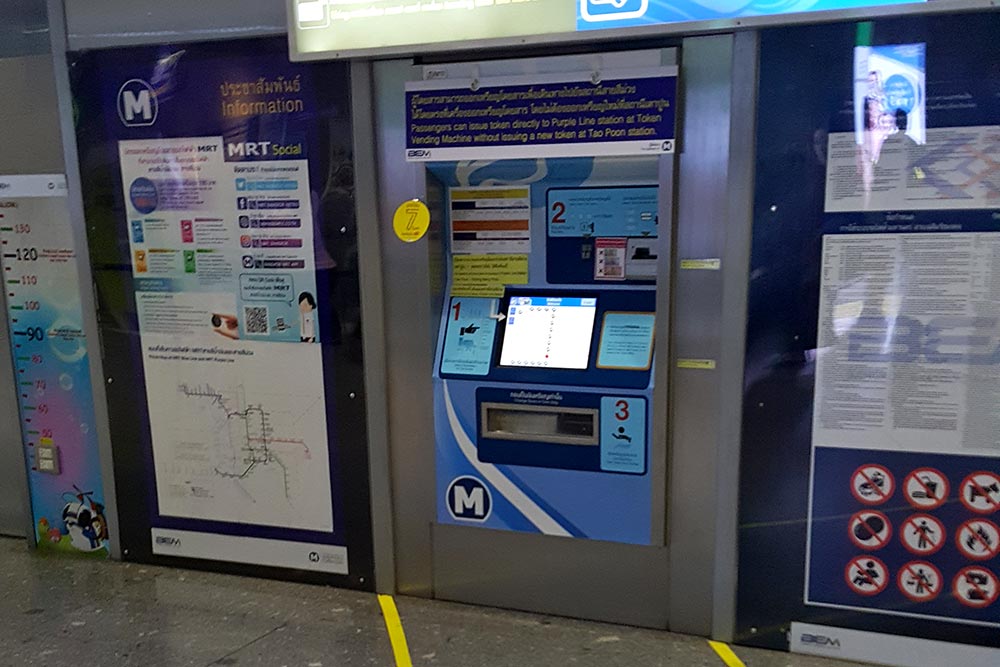 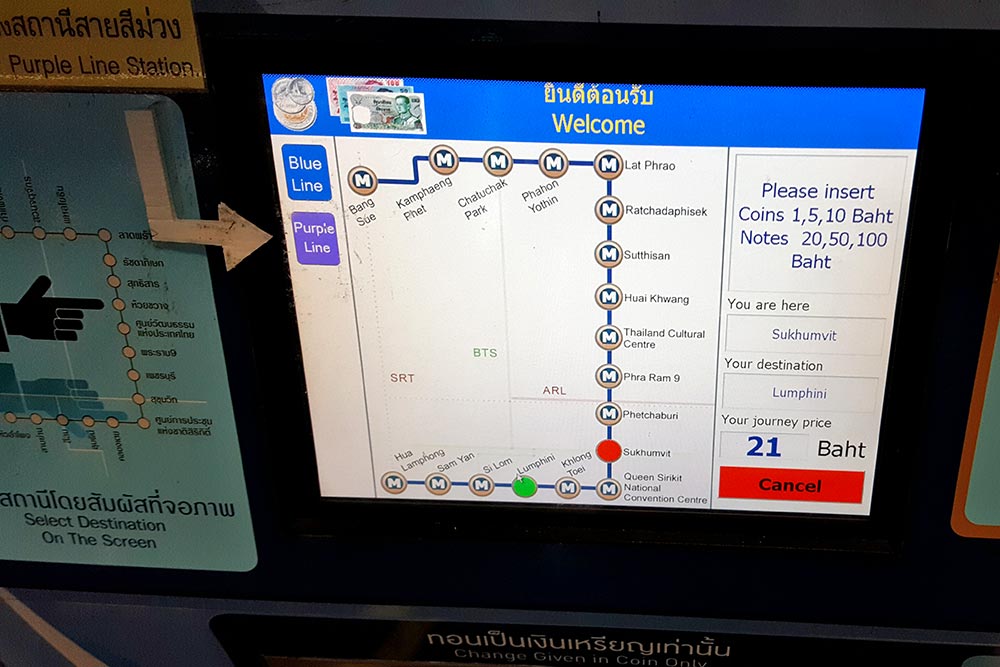 The ticket system is very simple, individual trips are charged and the price depends on the number of stops to be covered. At each station there are ticket machines and there are ticket offices. At the ticket machine it is very easy, here is displayed at which station you are currently, you just have to choose where you want. The fare is automatically calculated, the fare can be paid with coins and banknotes. If you have done everything right, the machine spits out a round plastic chip, the "token", the color is black. This serves to get through the cabinet system to the trains. In addition to the ticket vending machines, there is also a ticket office at each station, where you can buy a rechargeable card instead of the tokens. If you often use the MRT, you will save time with this card. 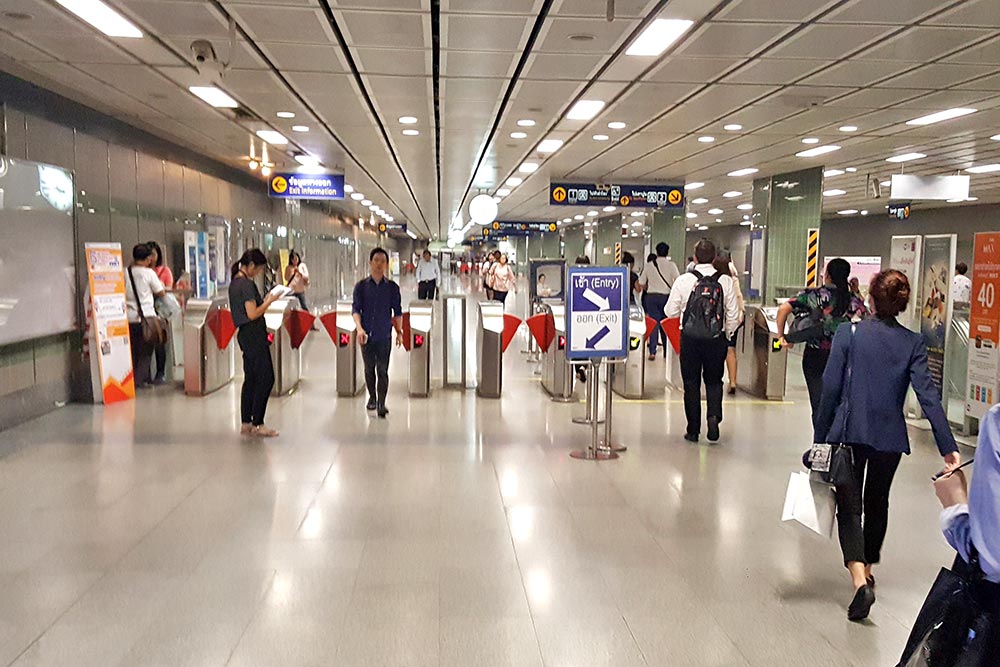 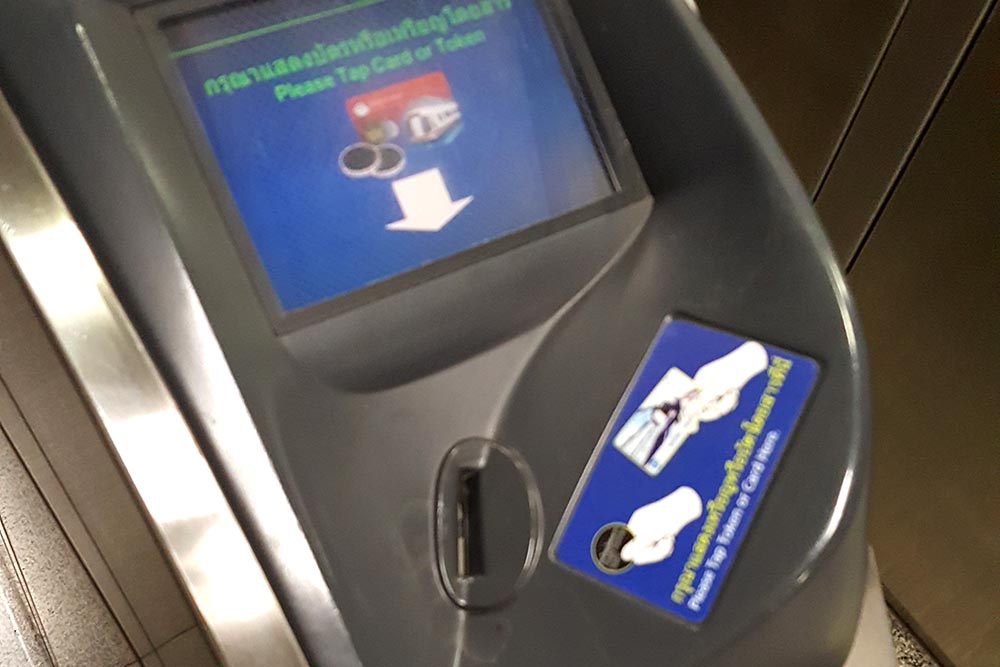 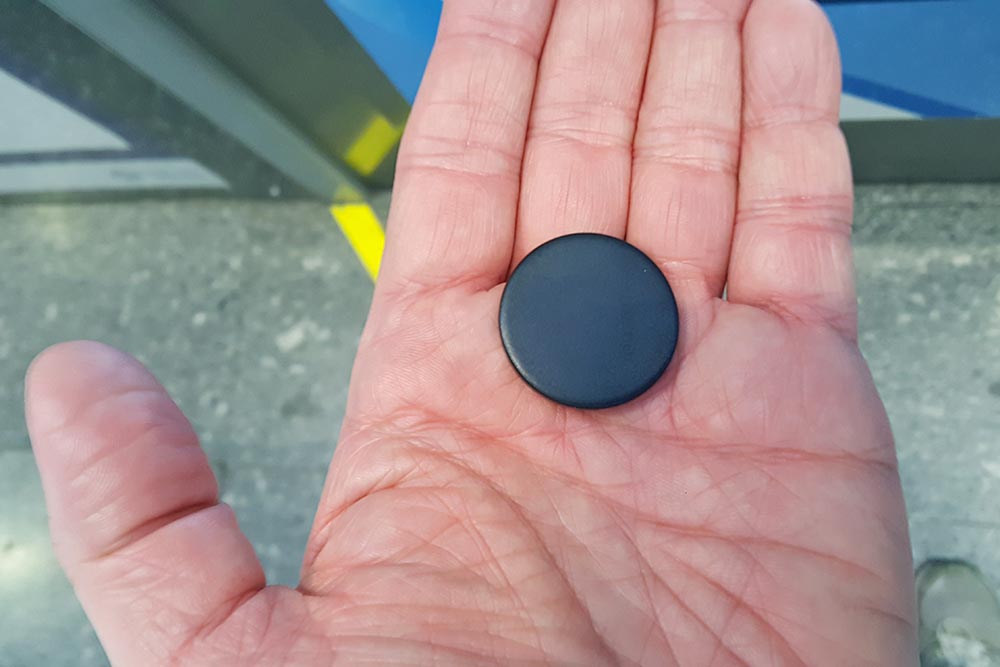 Enter the station (and leave again).

Without ticket or token you can not get to the trains, you first have to overcome a barrier system. This seems a bit strange when you do it for the first time, but it is very easy to understand. Where the journey begins, there is an area at the individual barriers where the token or the prepaid card is placed on it and the barrier opens. The token you need later to pass the barrier at the finish, so do not throw it carelessly! Arrived at the destination station, it is almost the same procedure: the token is inserted into the easily recognizable slot, if you have a PrePaid Card, put it on the visible surface, the barrier opens, ready. 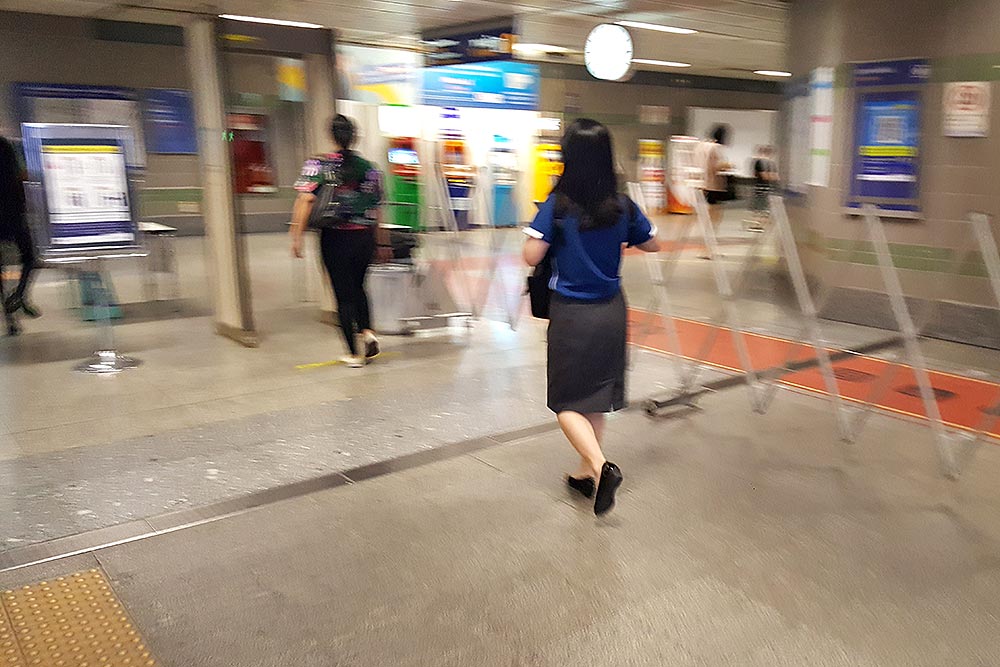 Safety is high! There are checks at the entrances to the metro, on the one hand there are detectors which you have to pass through and in addition the security personnel would like to take a look in bags. Again, as with the BTS stations, tourists are simply waved through, but you should always be prepared to be controlled, it does not hurt. 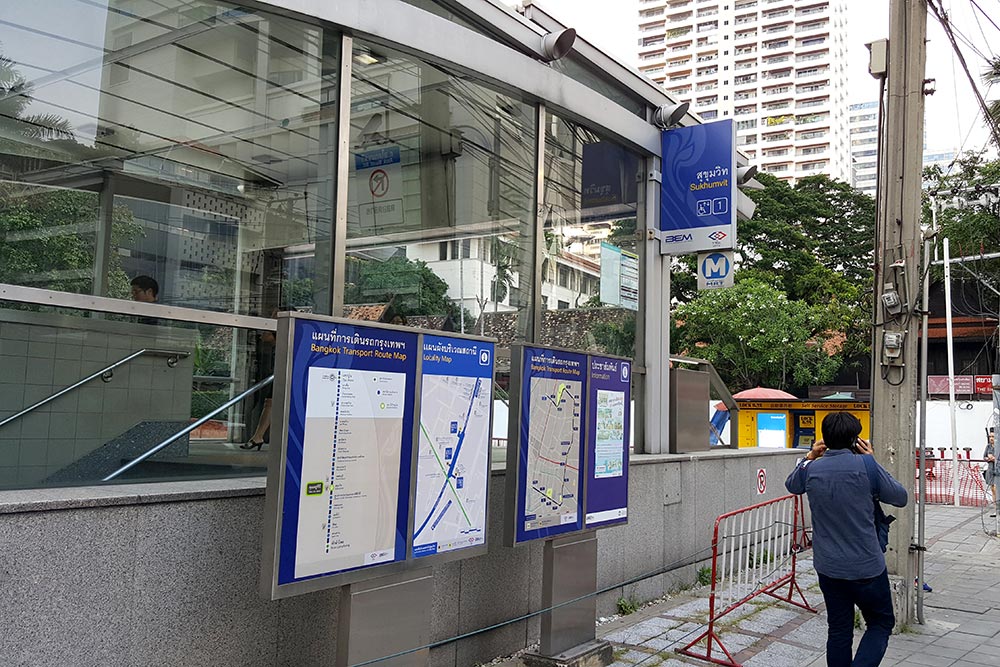 The route network of the MRT currently consists of two routes, they are divided into the Blue Line and the Violet Line. The Blue Line operates more in the city center, the Violet Line goes to the north-western area. The Blue Line offers transfer to the BTS at Mo Chit, Asok and Sala Daeng. You can also change from the MRT at Phetchaburi Station to the Airport Rail Link at Makkasan Station to take the ARL to Suvarnabhumi Airport.