Small collection of a few scrapped planes, with the highlight of a Boeing 747.

How to get to the Airplane Graveyard

Possibility number 2, no matter where you start, you treat yourself to a taxi. It's easy to say, but you should not rely on every taxi driver to know this place, even if it's still so exotic and you think that's what everyone needs to know. And depending on if you have now found a driver who knows the place and would go there, depending on how far the approach is, you should possibly call a fixed price before the ride OR you take as an orientation the cost table for the possible to driving kilometers and you calculate a price, which should coincide with the kilometer prices of the taxi rides. Too complicated? You can take another look at our taxi area.

Last but not least, it also works in a mixed form. The starting point in this case is the BTS station Phaya Thai, because from there the Airport Rail Link goes to the airport Suvarnabhumi. With the ARL you drive to the 4th station Hua Mak. If you leave the station, it seems a bit inconspicuous, but you are right on a busy street where it certainly should not take long to get a taxi, or more adventurous like, with a motorbike taxi back the rest of the way to the Airplane Graveyard.

Museum or park or what is it?

Airplane Graveyard is a small plane graveyard with parts of a disassembled Boeing 747 and two McDonnell Douglas MD82. The fuselage and wings of the former liners are partly incomplete, understandably, the parts of the aircraft were sold (profitably) at the butchering of the aircraft (the former engines are not to be admired here), so that the "less" valuable parts are lagging behind and now the extraordinary Make an exhibition. The place where the wrecks are located is private land, for entering the terrain and climb on or in the aircraft, an entrance fee must be paid.

If you arrive at the Airplane Graveyard and not just one or the other visitors in the private area look at the wrecks, it may be that you first stand in front of a locked gate. But you do not have to worry too much, you will soon be recognized as a potential visitor and of the people who live there and more or less keep watch at the gate, then also addressed the place to visit. The gate also has another function that potential visitors are not unexpectedly enter the place and the owners of the entrance is lost, because the visit of the aircraft is not free.

Who will come to Bangkok, will often not find the Airplane Graveyard on his note of attractions, even a trip to this place is quite exciting! Where do you have "interactive" sights? Here you have the opportunity to get at aircraft wrecks, to photograph them, to touch them and even to enter them! Tip #1: sturdy shoes. Just who intends to look at the aircraft wrecks from the inside, as a precaution should take care not to be hurt. That's why Tip #2: wear long pants. The interiors can be entered RELATIVELY safely, but you can always get scratches and scuffs as soon as you are unattractive.

Ticks are also found in Bangkok, as the wreckage is partly surrounded by tall grasses, so all those who want to explore every corner of the Airplane Graveyard should consider wearing long trousers. Tip #3: It is hot in Bangkok almost constantly, there is hardly an optimal time to visit the wrecks. Of course it will be less hot in the morning or in the late afternoon than when the sun burns in at noon, or maybe one or the other prefers to go to the camp when it is cloudy ... You'll probably get a sweat anyway, you can cool off afterwards instead of entering the planes with light clothing.

Tip #4: Time. Take plenty of time for the trip. The wrecks are sure to have passed relatively quickly, but the wrecks provide lots of eye-catching detail and extraordinary memories. Prefer to spend a little longer in the field than fast fast. Tip #5: It is always advisable when to take trips in the heat of Bangkok and drink extensively before, during and after dinner.

Map to the Airplane Graveyard

That's a matter of priorities. Those who come to Bangkok to see the usual sights, who focus more on culture, religion and food, will not feel exciting at the Airplane Graveyard. Btw... who still knows a playground from his childhood? Did not that have a tremendous appeal? It is similar here, the atmosphere is already exciting and just the wreck of the 747 grants a special insight into the inner life. We say yes, it definitely worth a visit to the Airplane Graveyard. 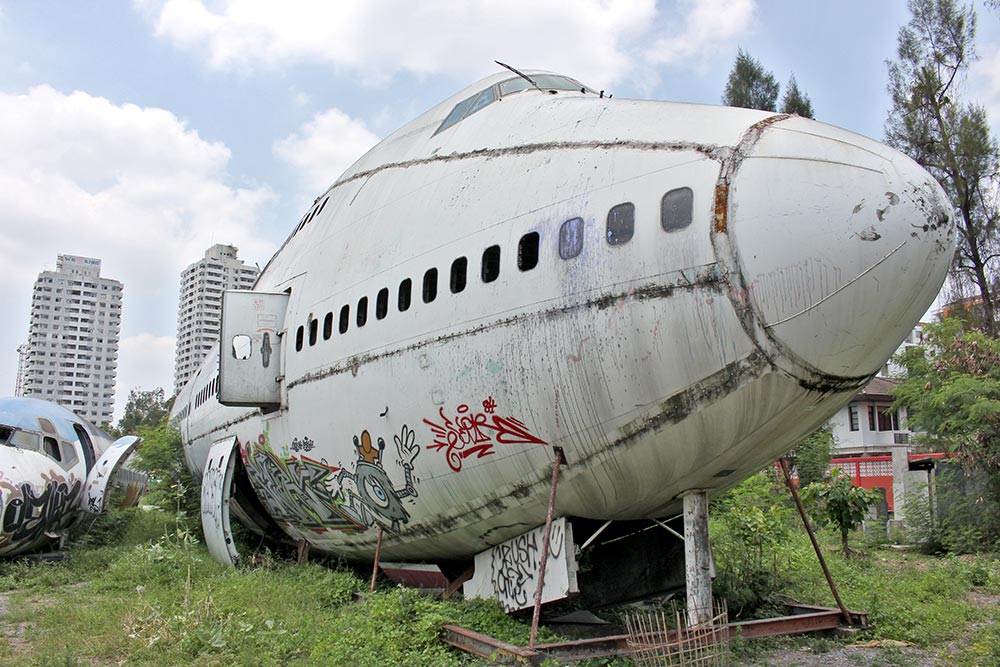 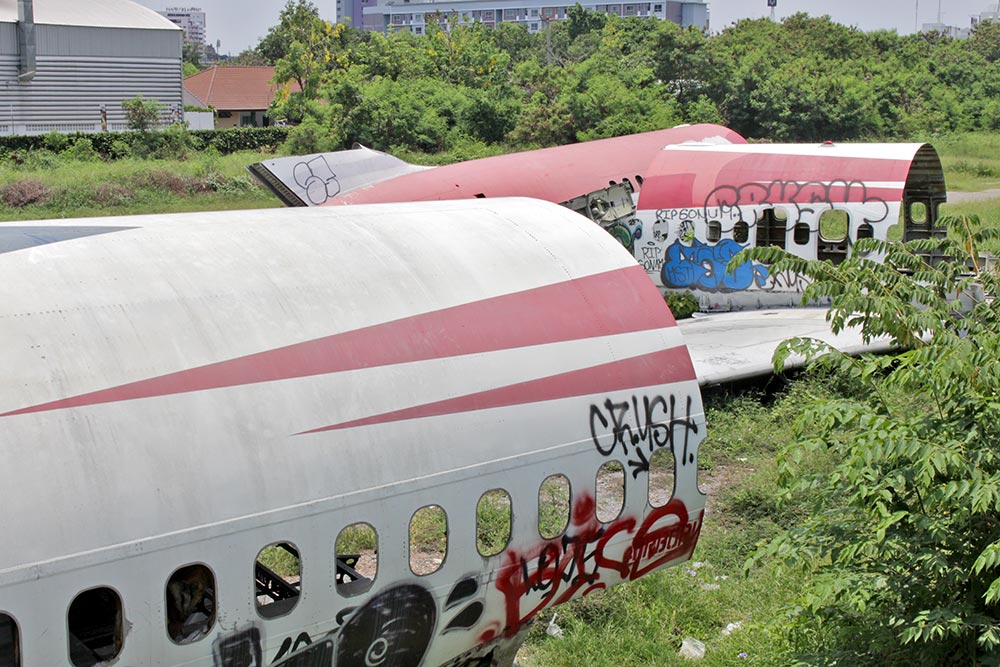 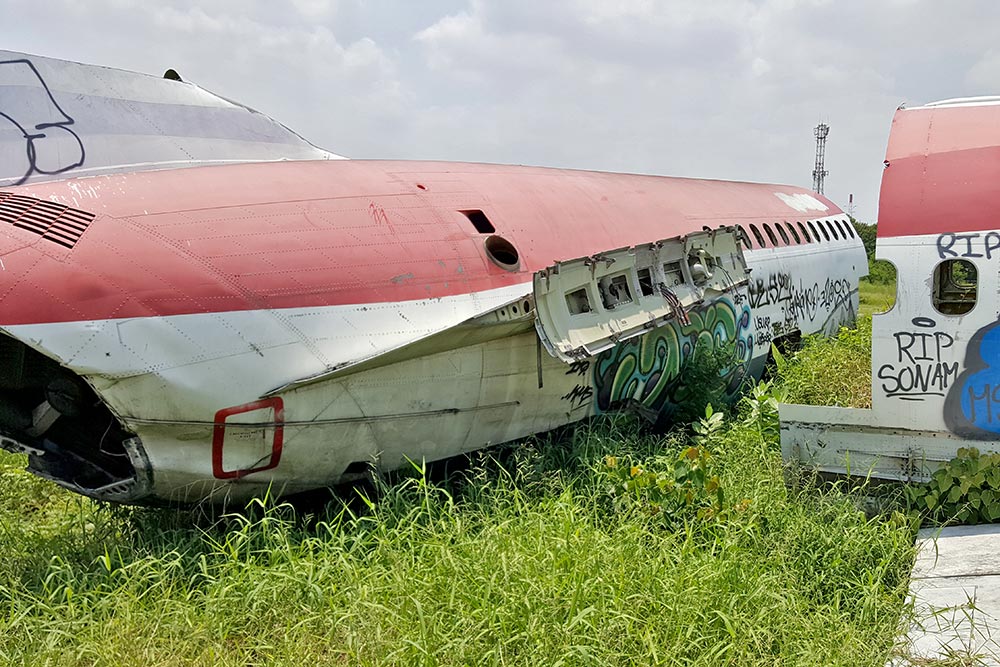 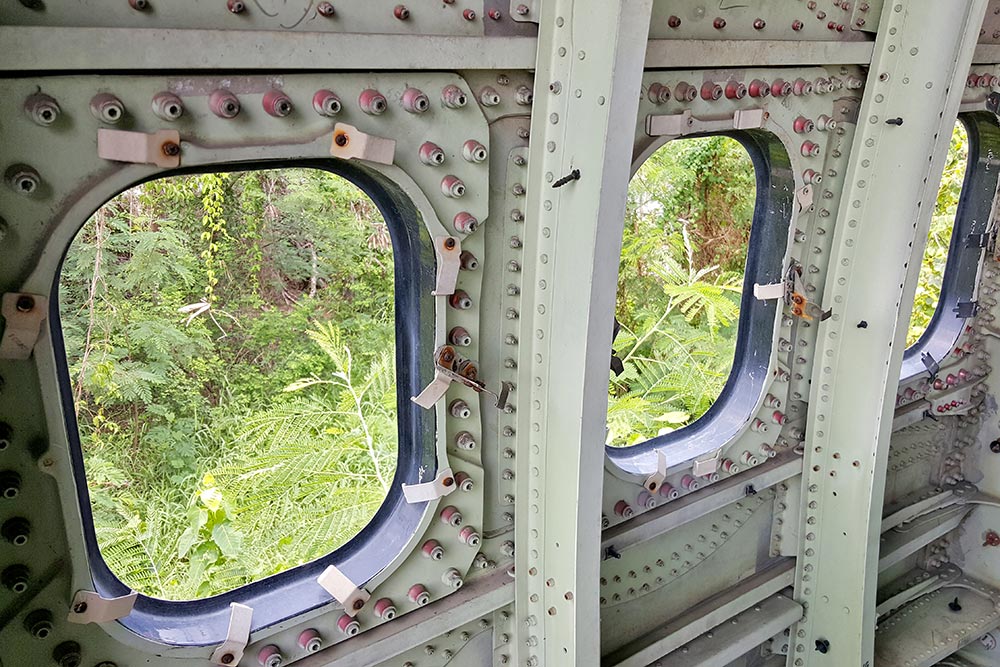 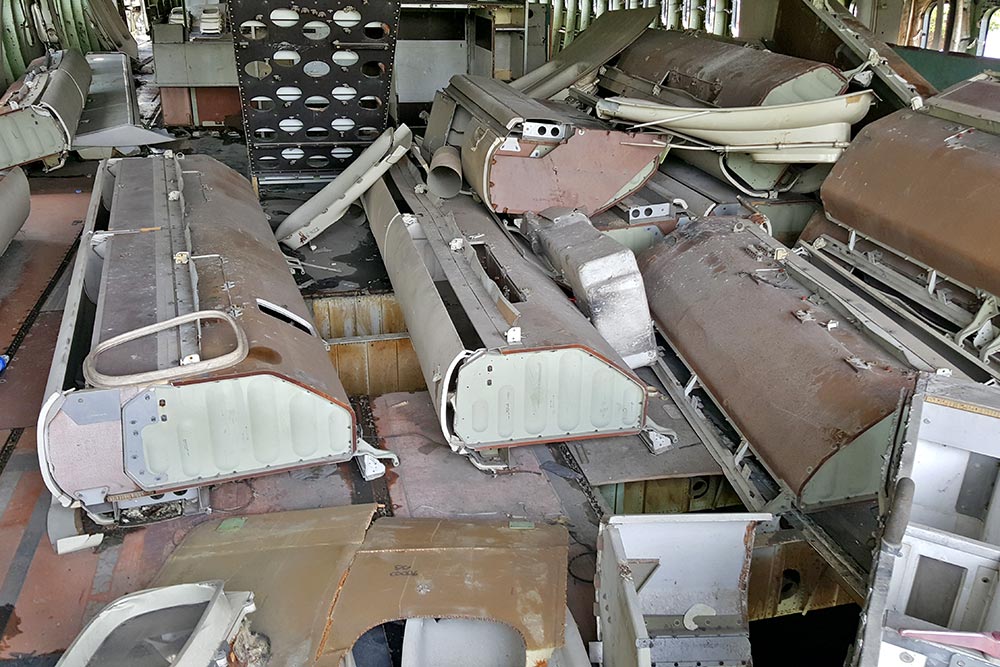 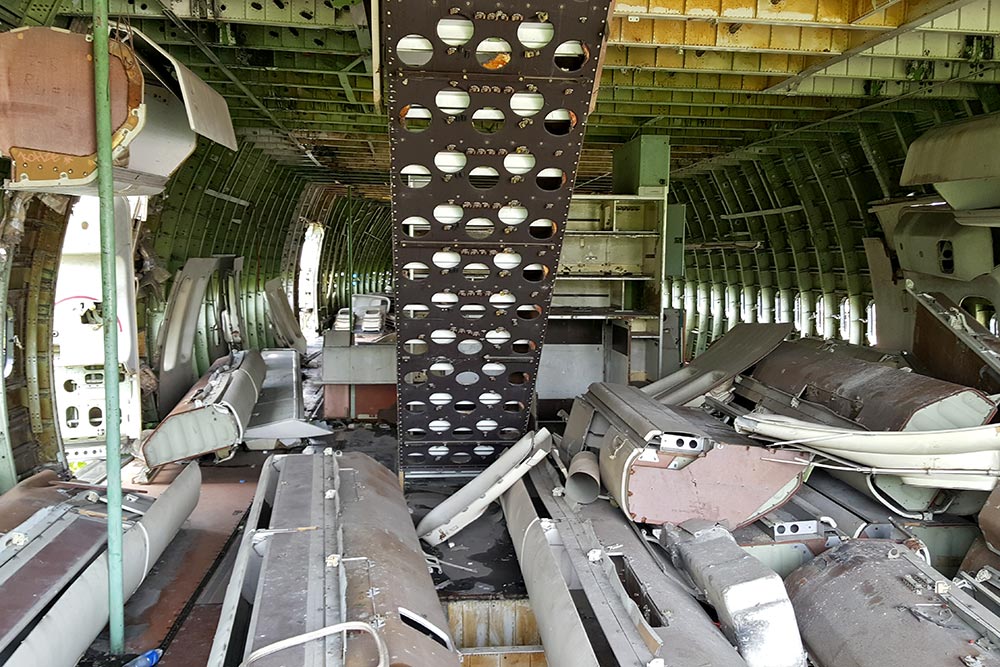 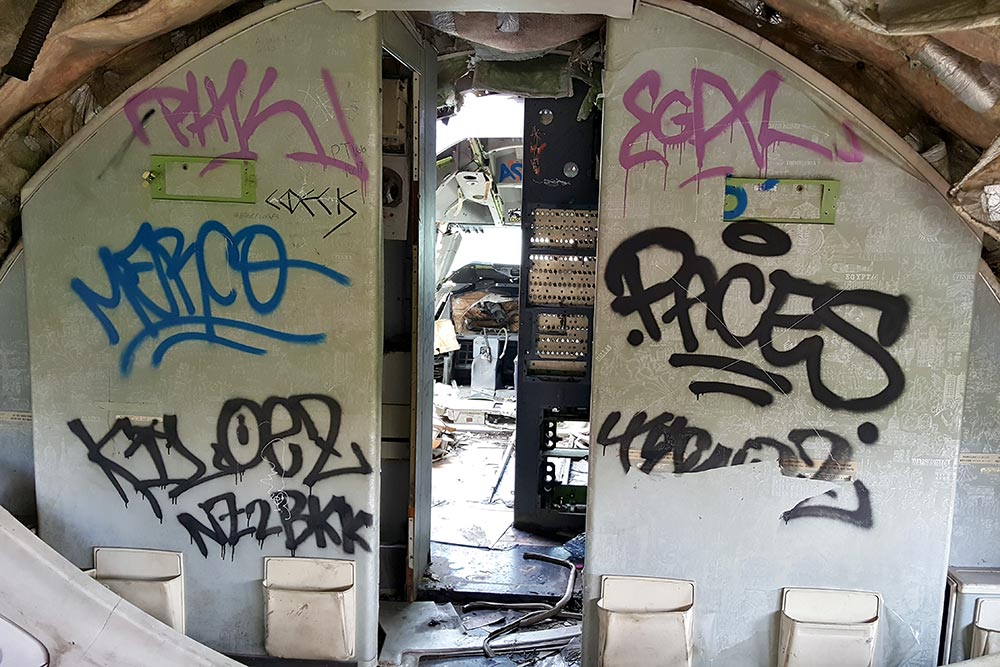 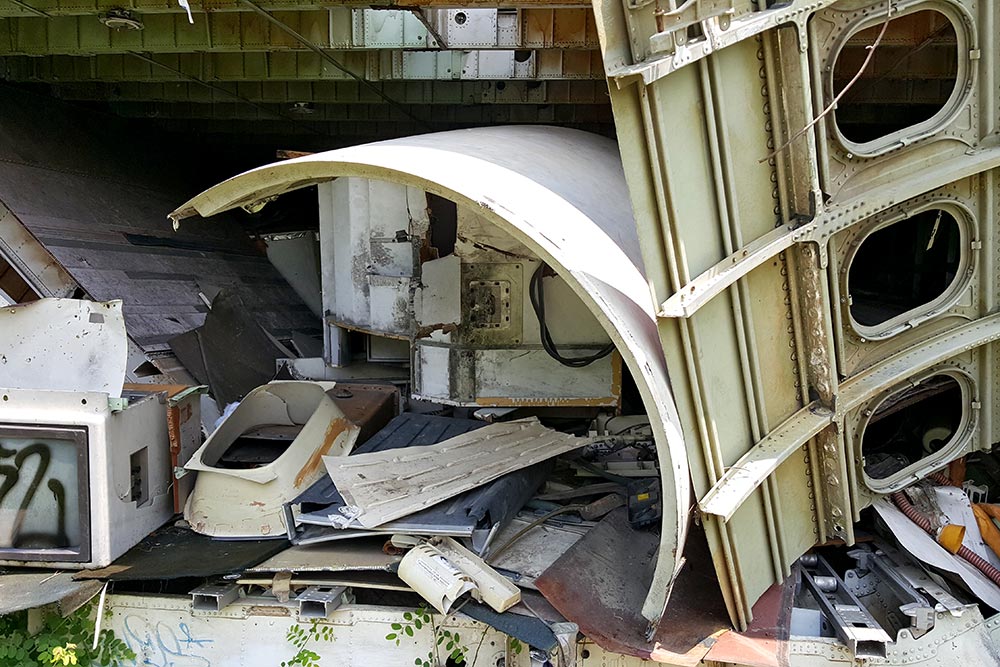 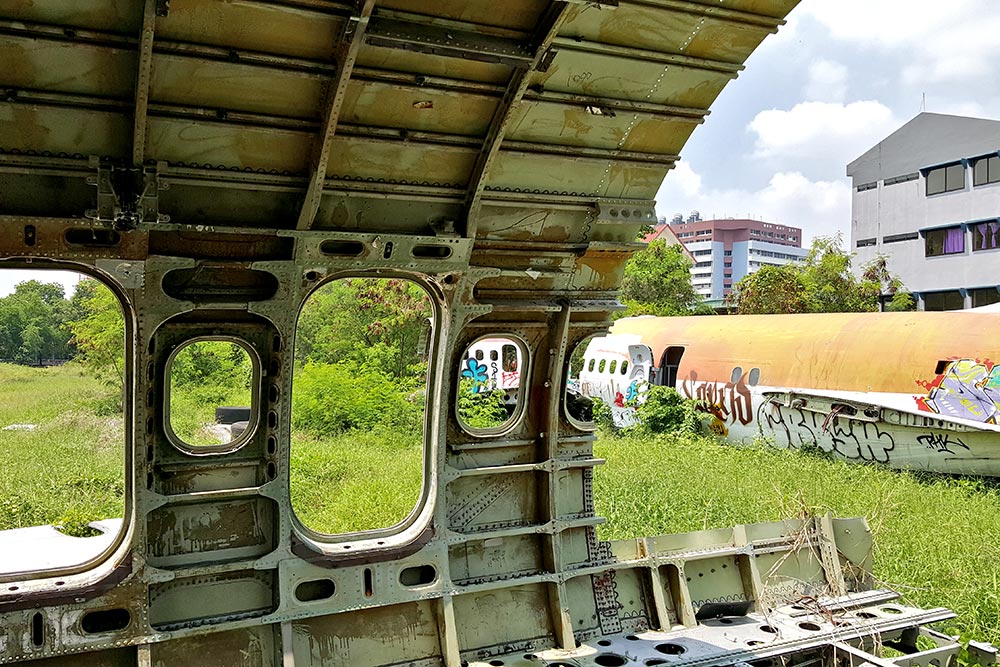 Go with the kids?
We say NO! Children would certainly love such a trip, but who wants to take his children here to the adult playground, must have his kids very well under control. If the kids are allowed to do what they want here and go on their own exploration, no parent will really find relaxation. As nice as this place is, we think this place is for adults and not for children.
Information?
Anyone expecting a specialist who is doing guided tours here is out of place. The residents we encountered did not speak English (or did not want to be annoying tourists). Ideally, you have a guide with you or you can speak Thai language when it comes to learning more about this place.
Time & Food
You should look at everything relaxed and take time for a visit. You should take something to drink for the trip. The place is located directly on the main road, making the arrival and departure is quite easy. Not far from the square there is an overpass on the other side of the street, where in the parking lot some traders offer their food and something to drink and also there is a 7 eleven supermarket so that you can eat or drink again.
Your Experiences
Did you visit the Airplane Graveyard and did you get some more experiences or saw something great? You can tell us your experiences or if you want, you can even write your own blog! 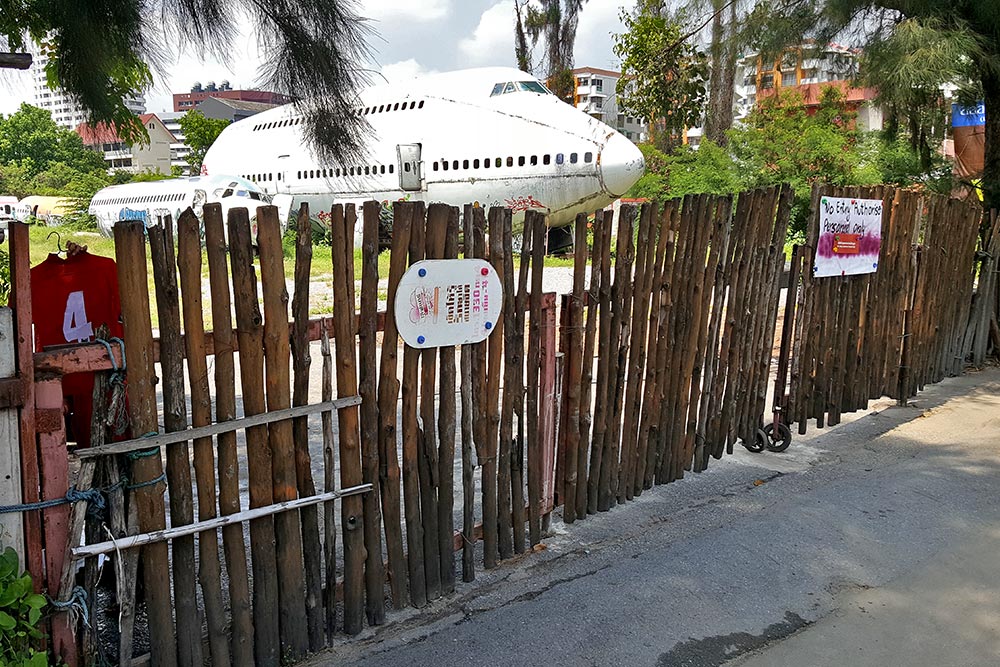 There are no special opening times. At the entrance gate you should always find someone who waits there for visitors. There are some Thai people living on the ground who collect the entry and let visitors on the Airplane Graveyard place. 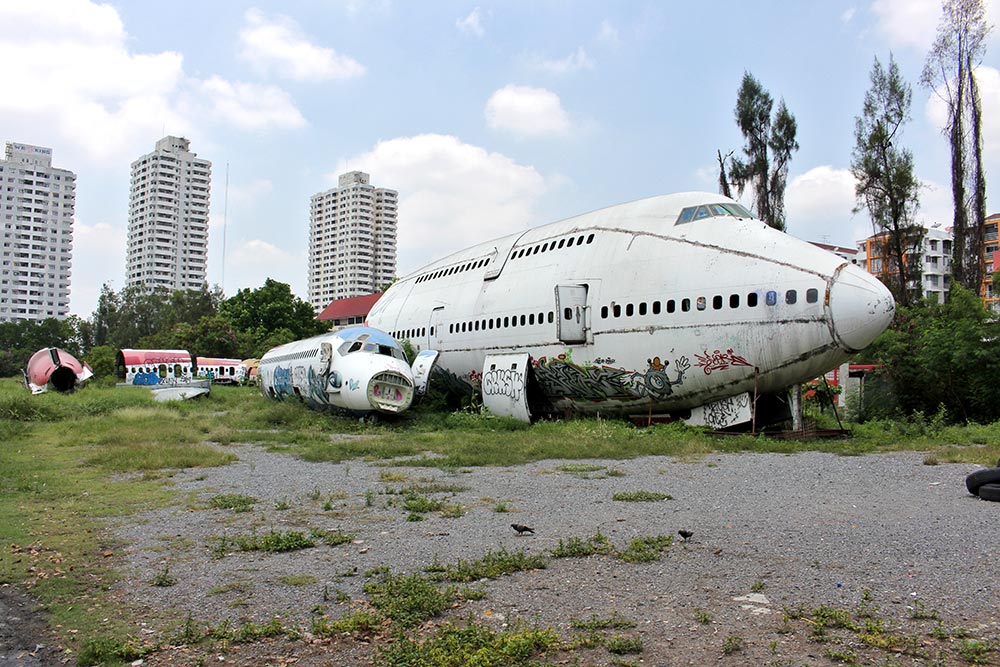 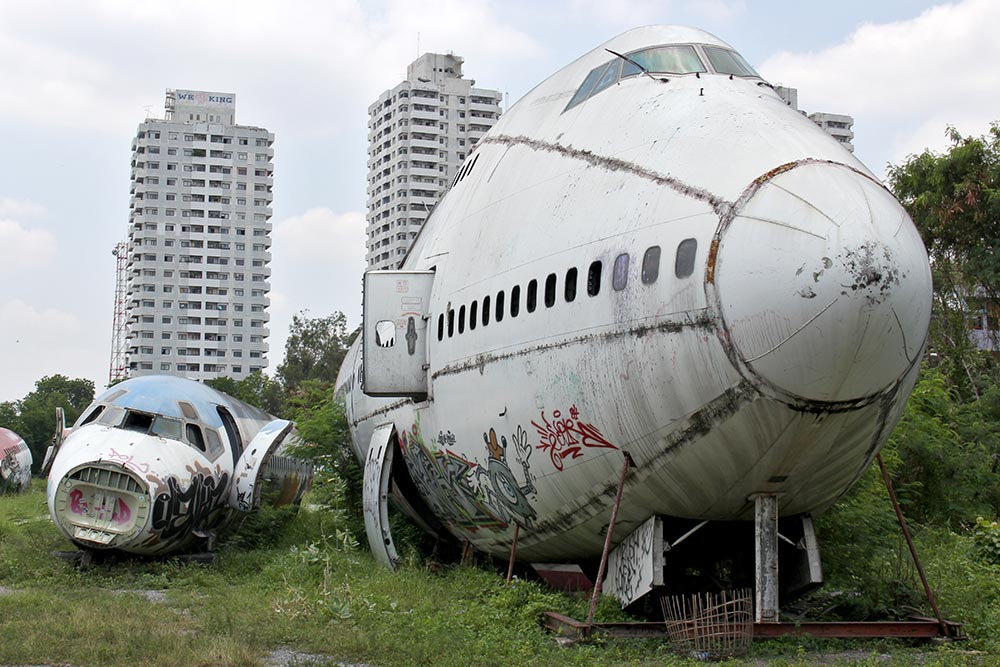 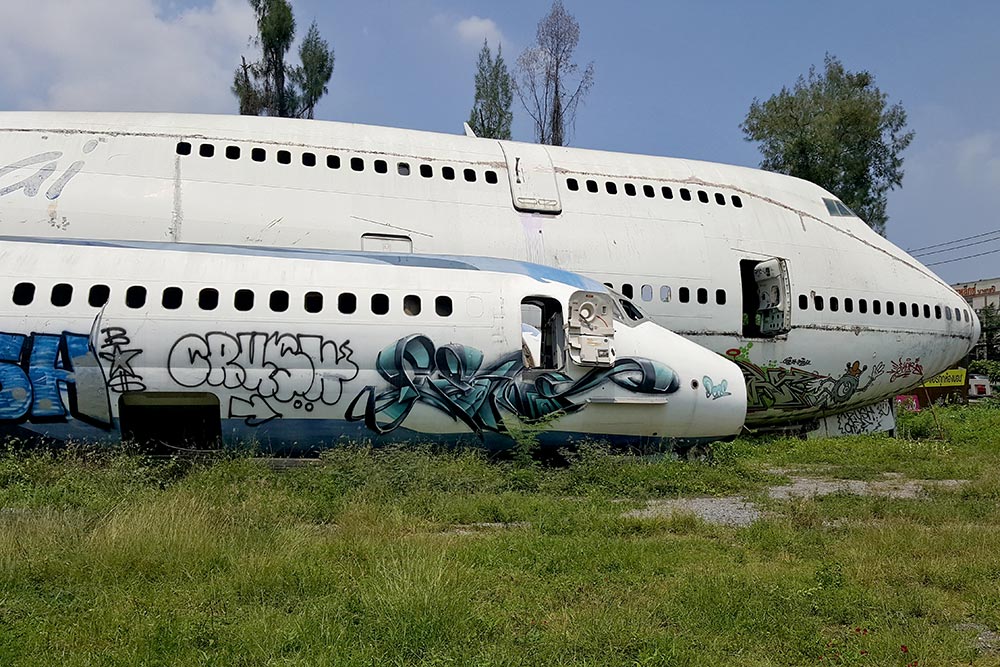 Right in front you will find the 747 and a Douglas. The first thing you notice is that the 747 looks a little bit battered. It seems as if it has been disassembled (for transport?) Into some parts and reassembled here. Separating or welding seams suggest this. 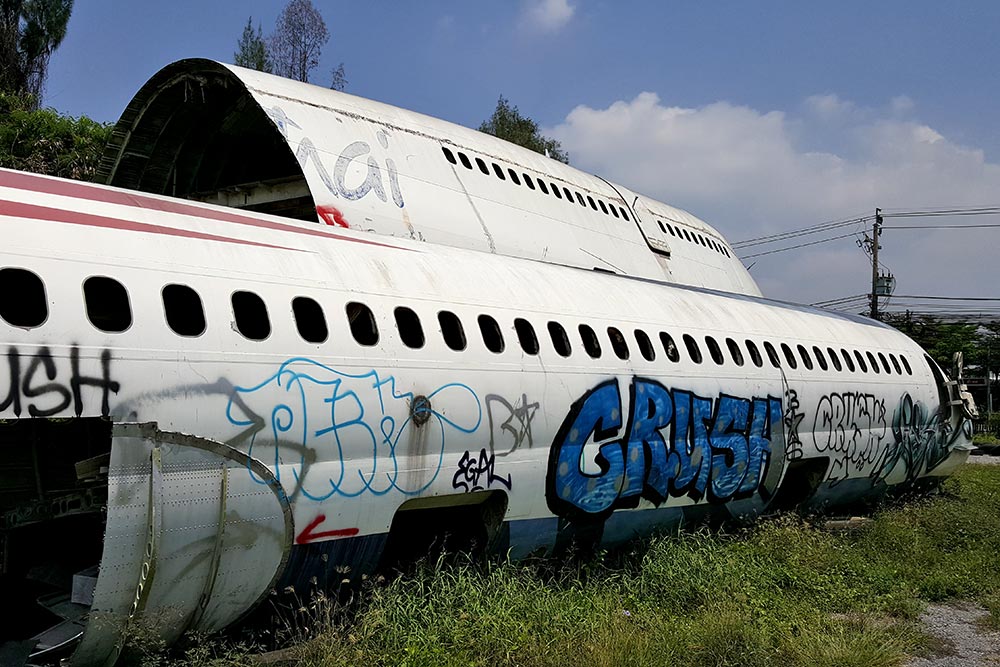 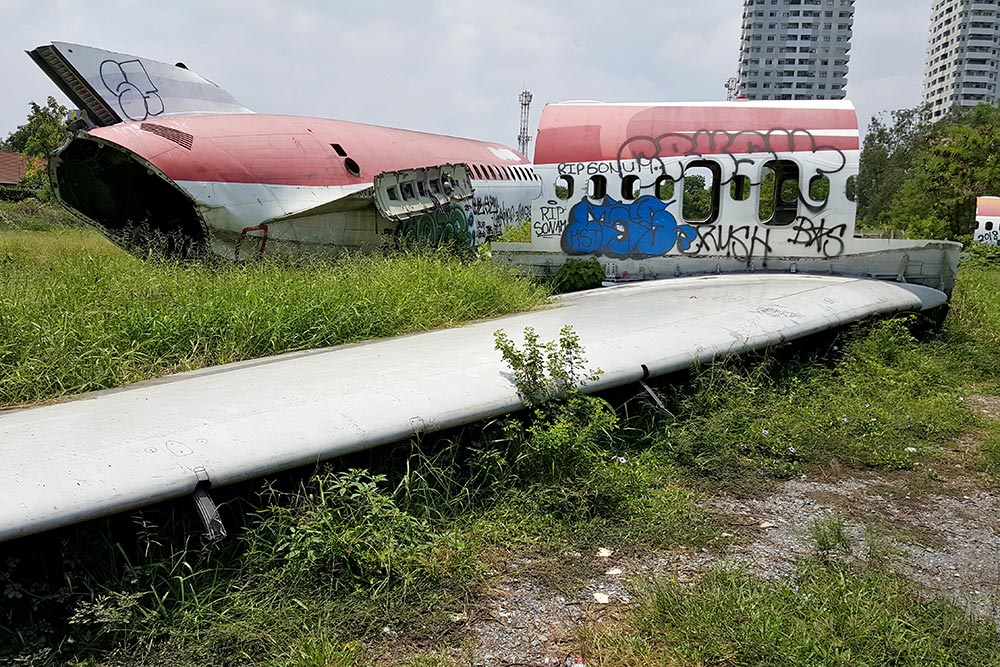 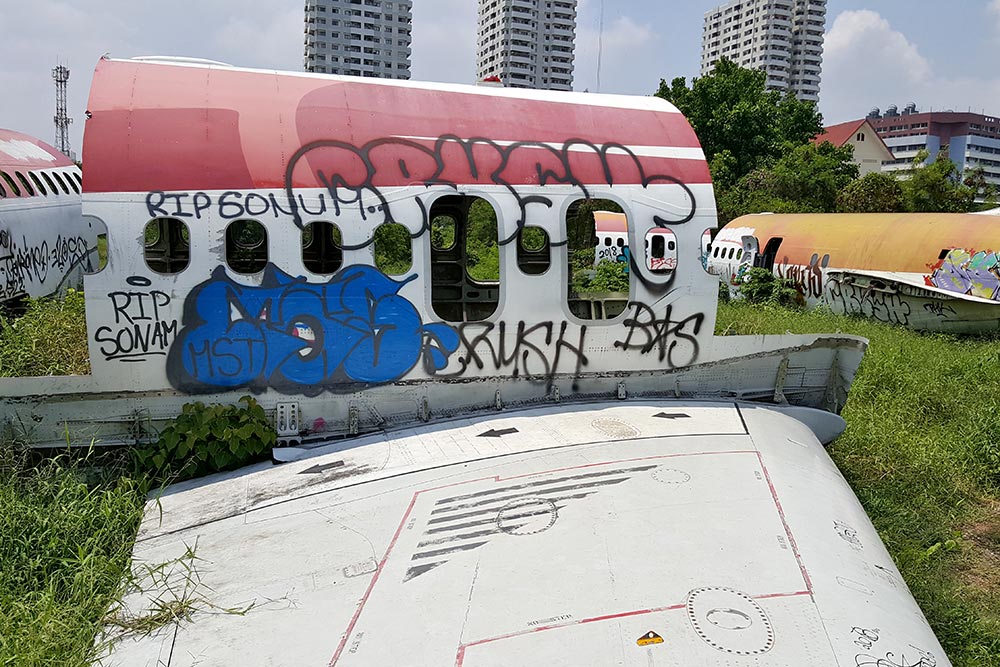 ...when you enter the place, the first thing you get is the Boeing 747, next to the first Douglas. Behind these two wreckage parts are more items of the two Douglas MD 82. No question, the 747 is not only impressive, it is also more exciting if you want to look closer. 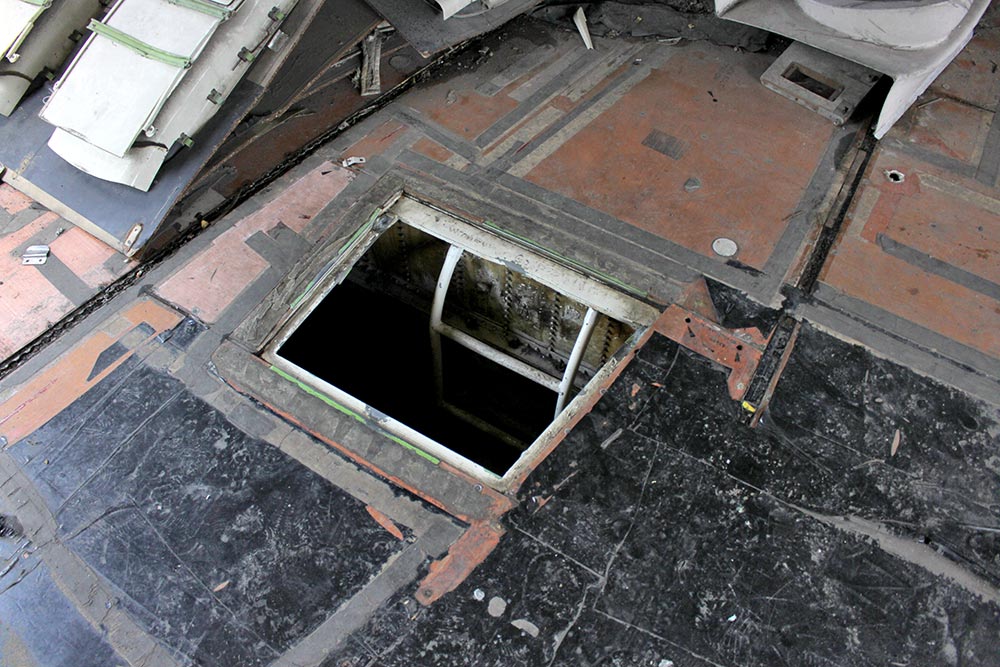 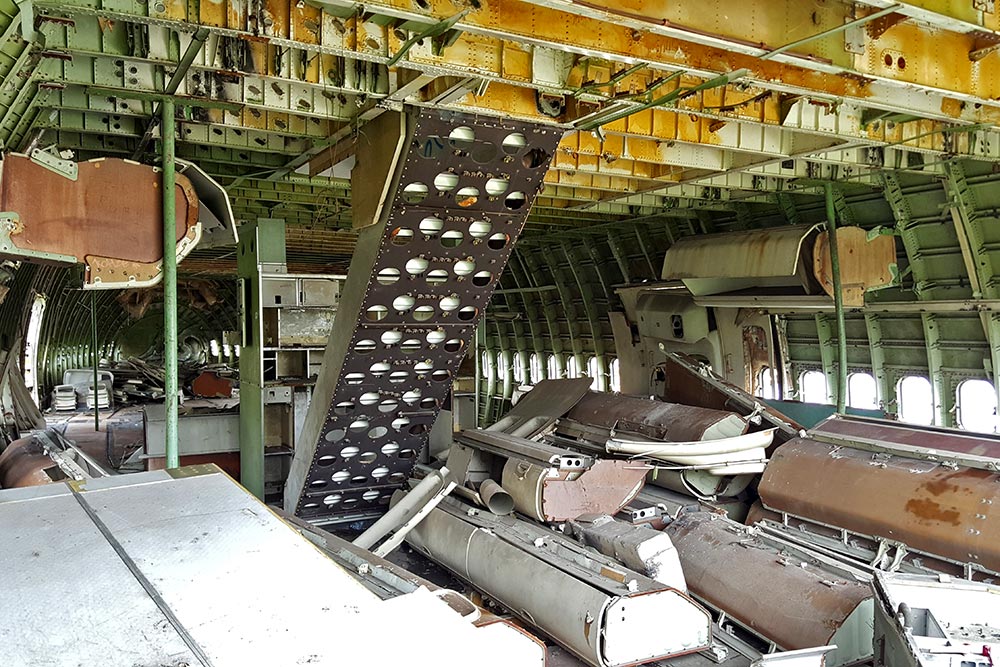 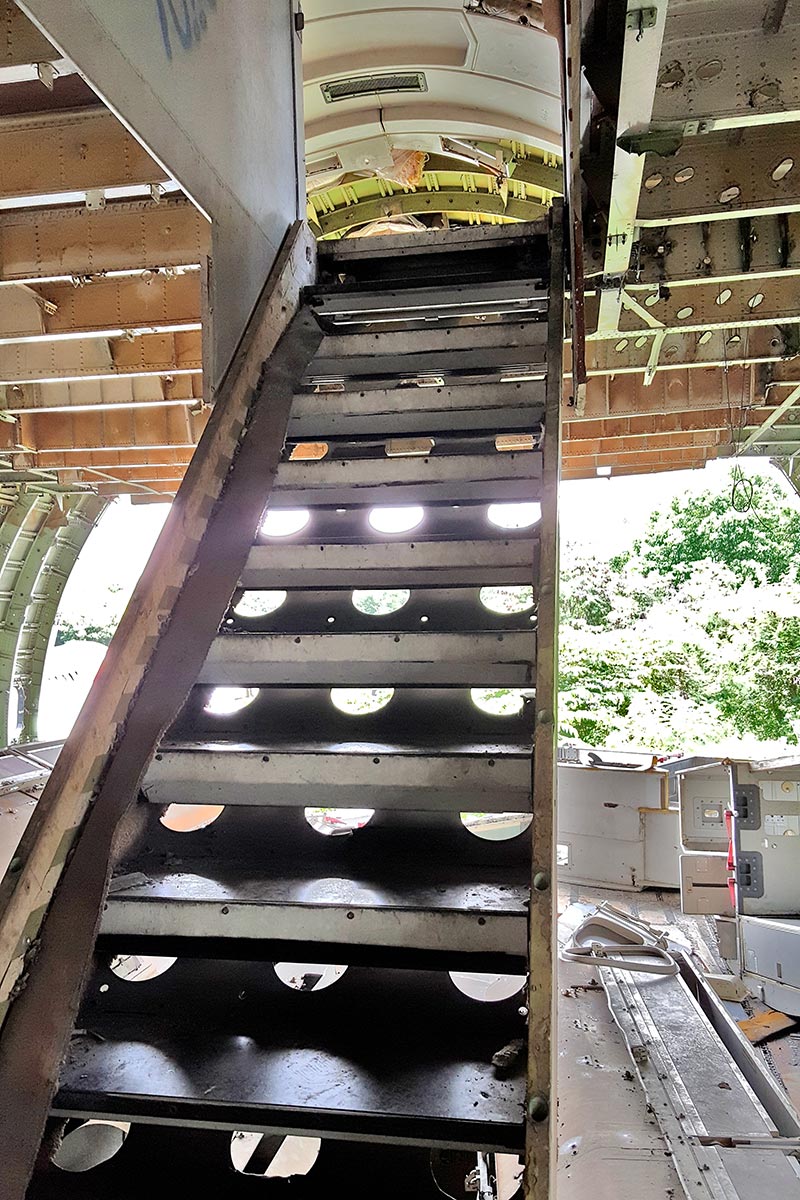 We do not have to mention that you get into the 747 at ground level. The 747 is divided into 3 levels, below is the cargo space, but there is nothing to see. You have to climb over a small ladder to the first level. So here is the first point to carefully enter the plane and climb up to the first floor. On the first floor at the back there is a much more comfortable staircase to reach the top floor. 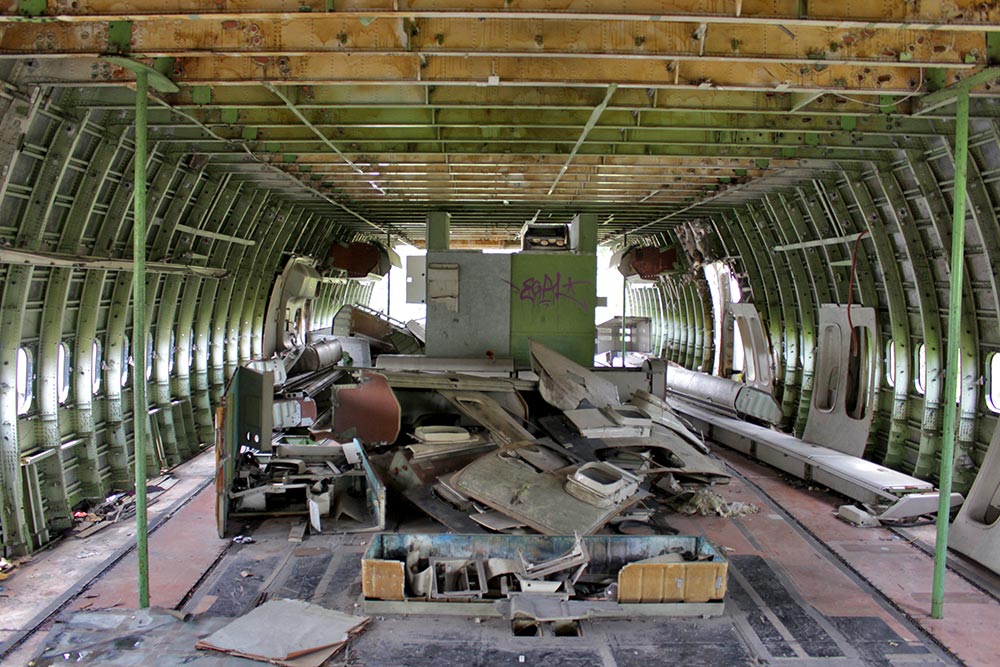 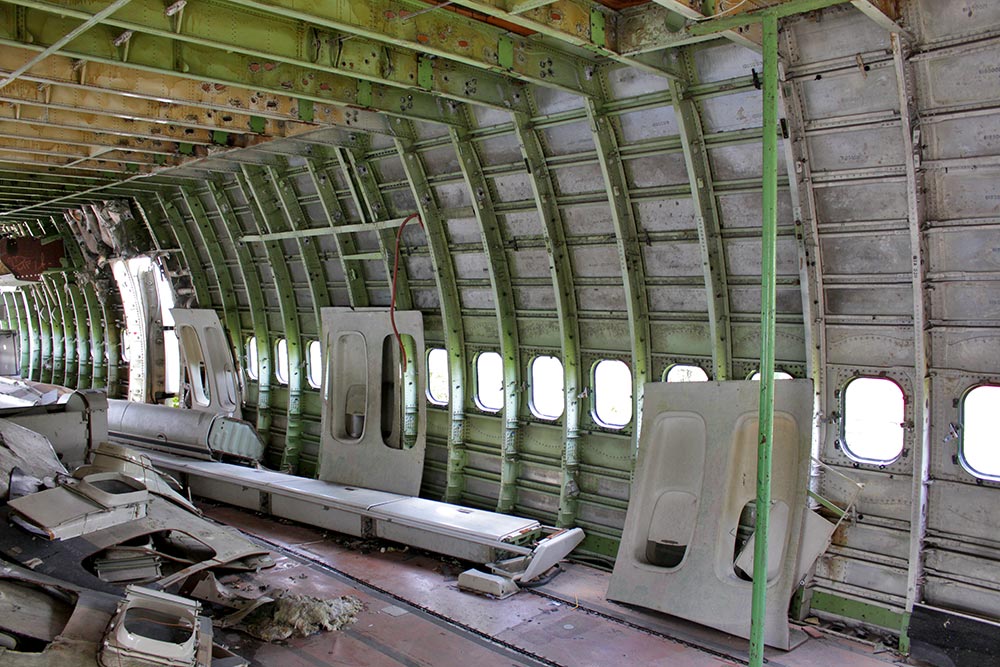 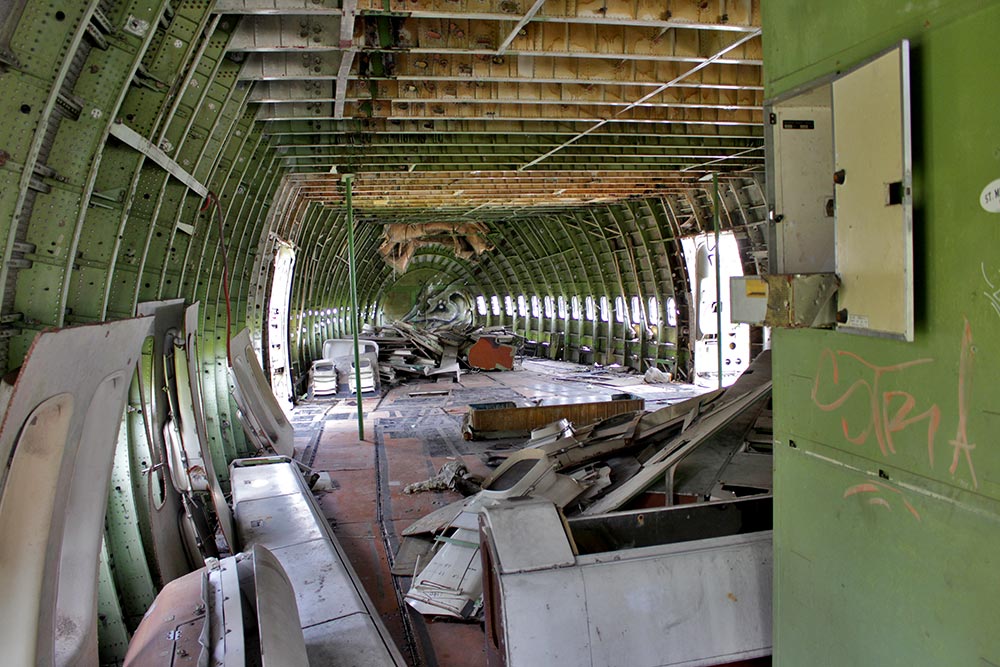 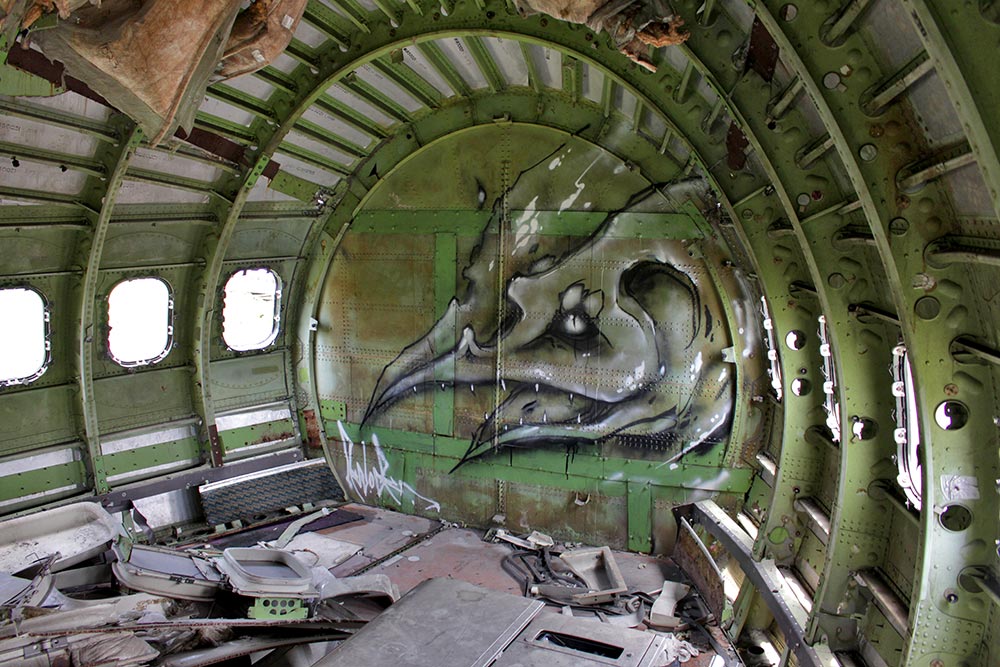 In the middle floor of the 747 you get a first impression of what the inside of the aircraft looks like. The precious things have been made into money during the slaughter. Nevertheless, the ripped-window shutters and the view to the skeleton provide a good insight into the construction of a 747. 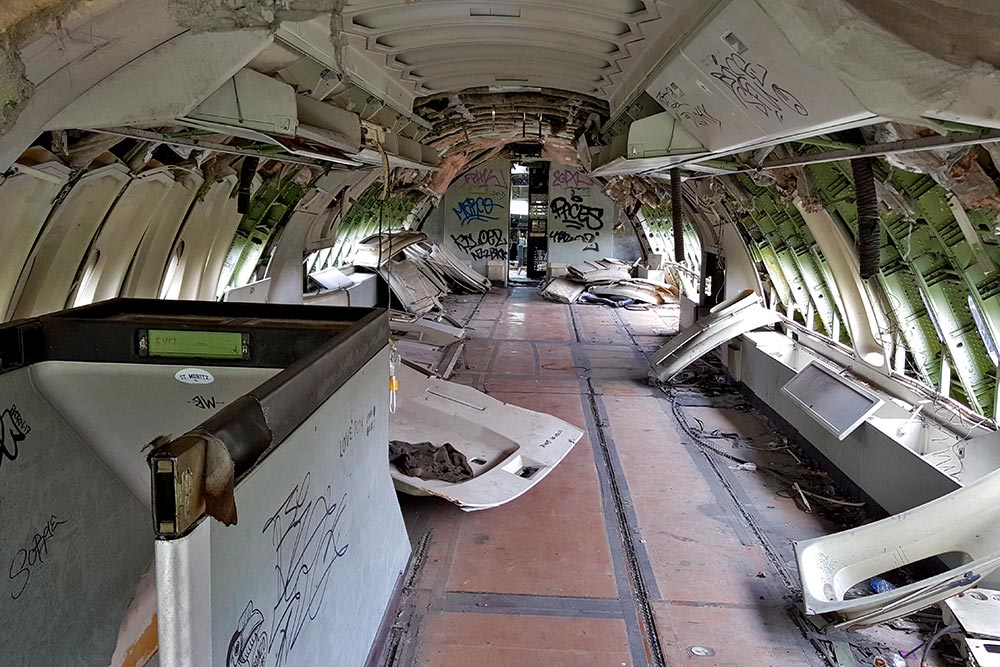 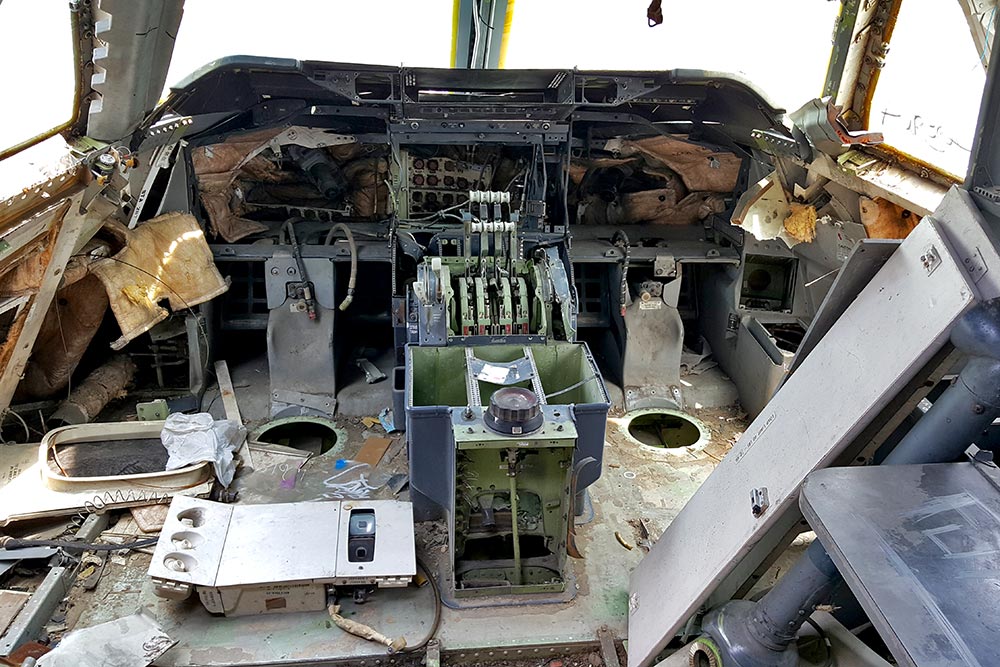 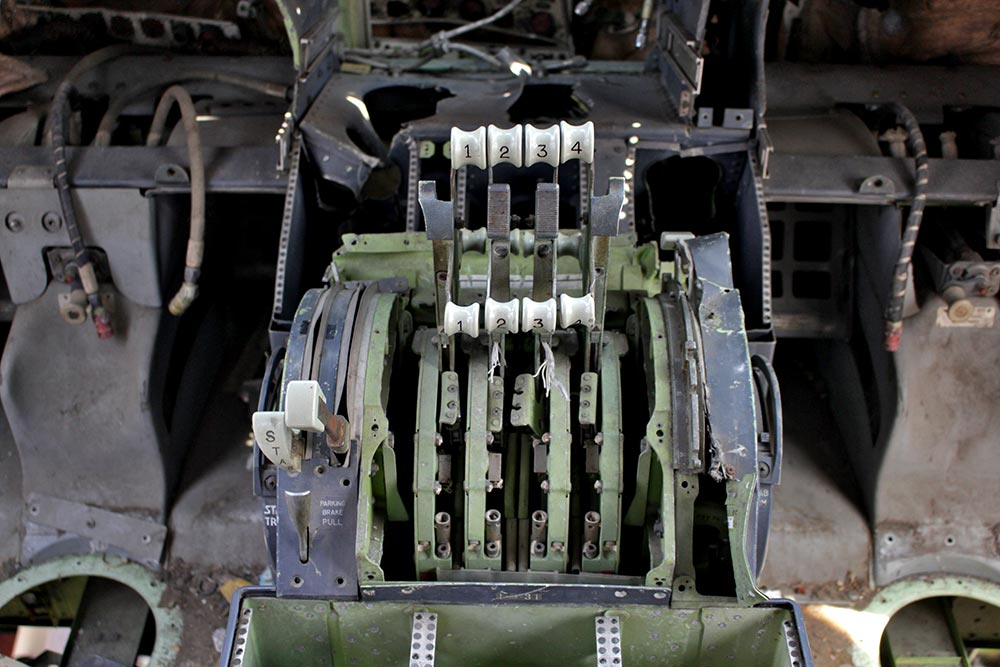 Then you are probably the most curious, when arrived in the upper floor, you would of course like to take a look into the cockpit. It is not surprising that you can not find a cockpit with all the instruments here, they have too high value and can be turned into money. How many flying hours does the 747 have? The view into the cockpit is always interesting, the profession of the pilots is already a great thing to be paid for the flights. 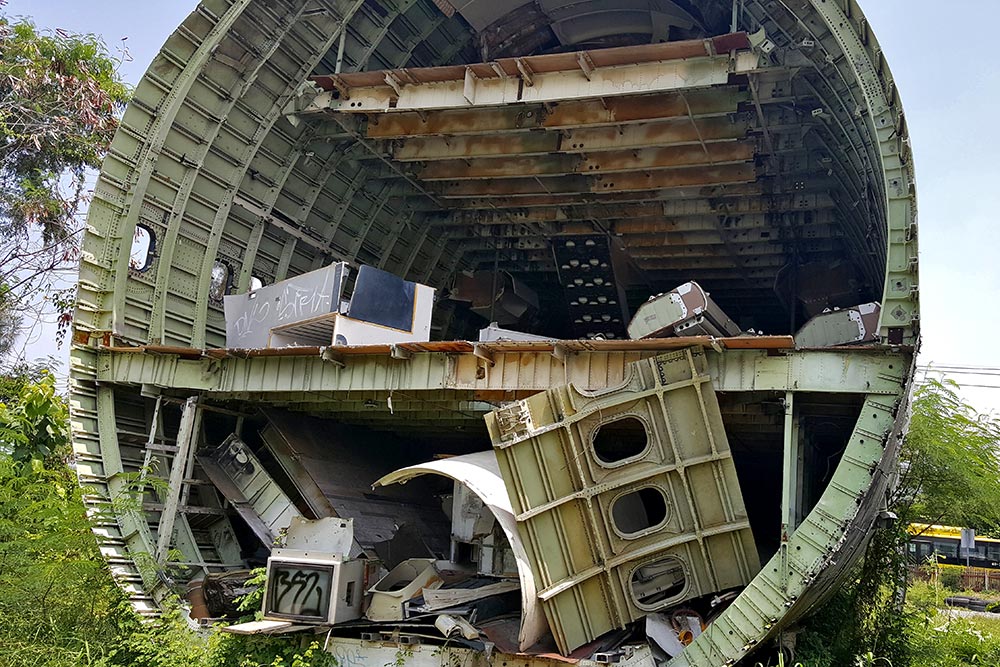 Here again the view of the open side of the 747, where you can see the three levels well. On the Graveyard there is not the whole 747 to see, it misses the wings and of course the engines. But even the small severed bug gives a good insight into the inner workings of a 747. Many thanks for that! A great idea was implemented and made the marveling and entering possible. 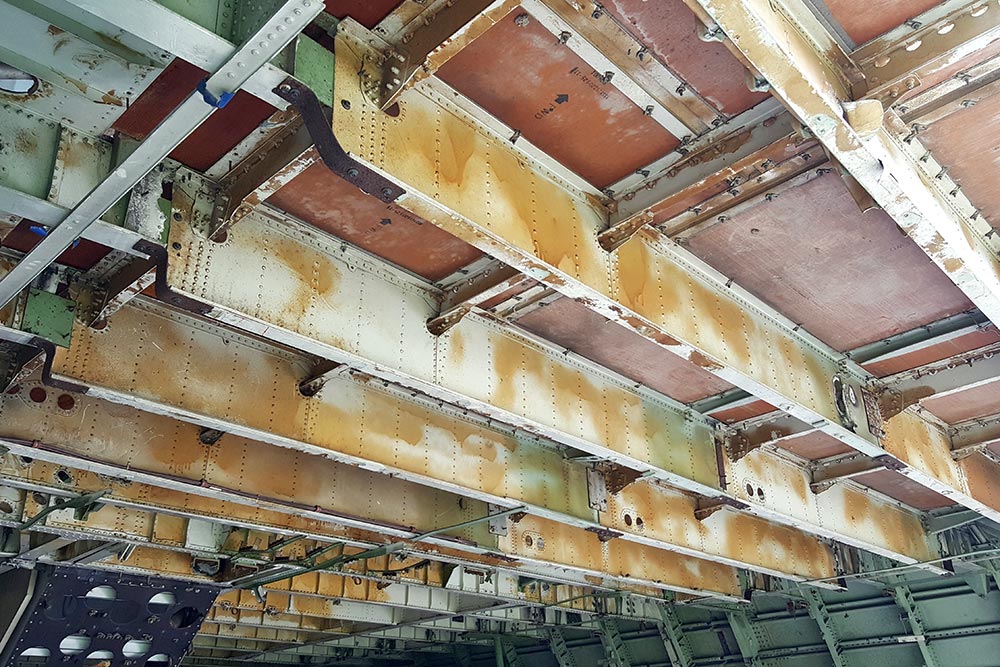 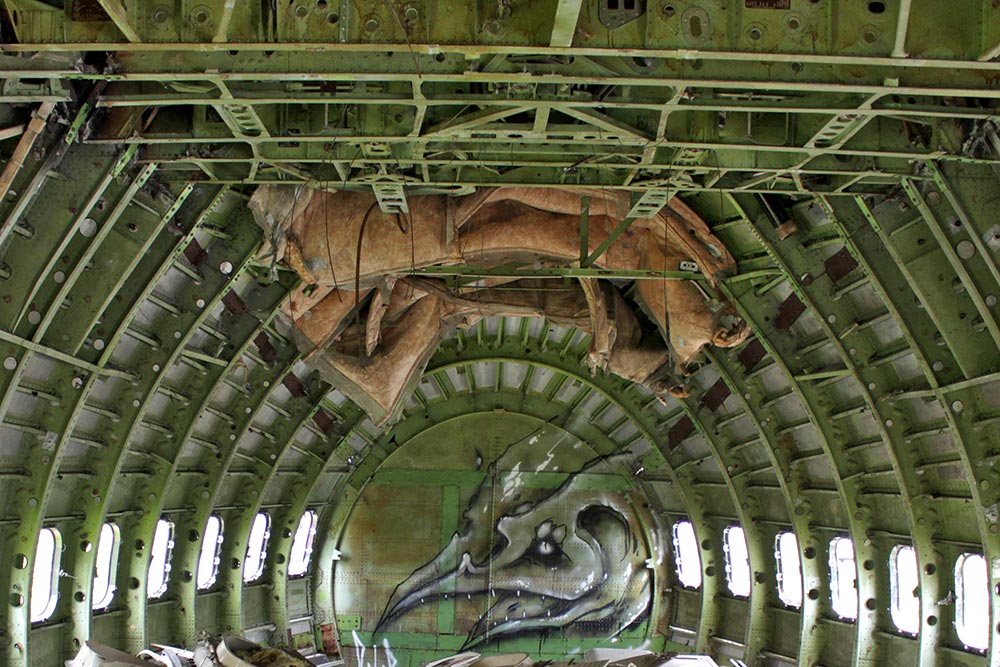 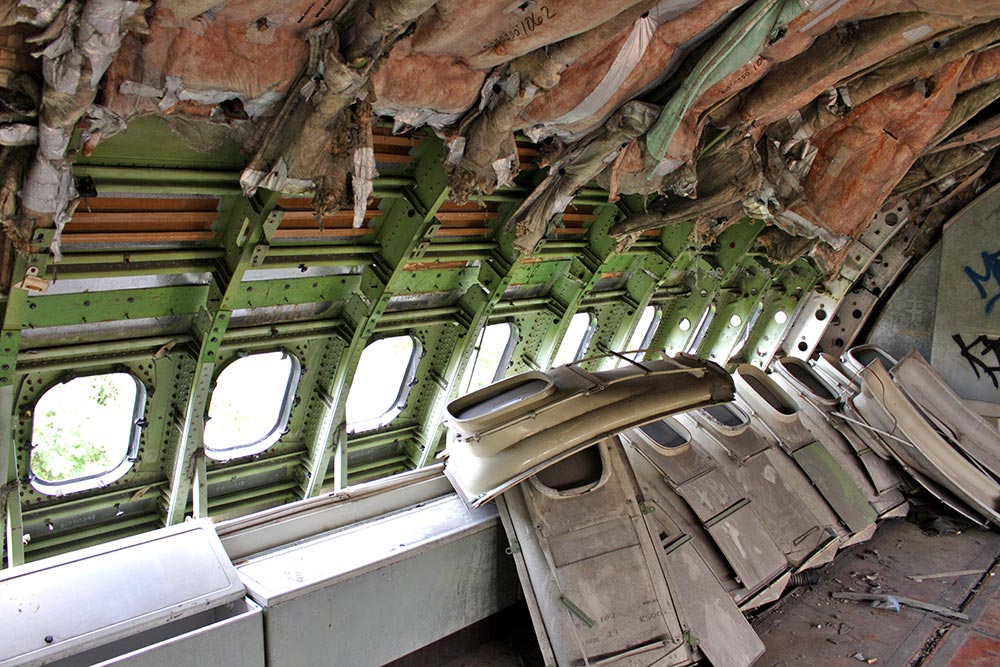 Enter at your own risk!

At this point again the hint that entering the wrecks is dangerous. It is sometimes tight, it is partly dirty and it is hot. In most places, the interior has been removed except for the outer shell. In some places there is still the insulating wool. We can not say whether one could possibly breathe in something unhealthy here. Who wants to play it safe, concerns the wreck with sturdy shoes, long pants and a mask for respiratory protection.

Always look up! Even if there is a lot of space to enter the wrecks, you can hang on a sharp edge with your leg, etc. Do not be overzealous, take your time to look at everything and keep your fingers away from things. One or another might want to take a souvenir of a special kind. That does not have to be, the future visitors all want to take a look at the wreckage without things disappearing more and more.