The New Year Festival in Thailand

The Songkran New Year Festival is one of the most exuberant festivals in the world.

Worth knowing about the Songkran New Year Festival.

Songkran is the traditional New Year Festival of the Thai, it takes place every year at the same time from the 13th to the 15th of April. In the tradition of Thai there are many rituals for the New Year, which are regarded as a sign of cleansing and a new beginning. Water plays the essential role in the Songkran and not only the houses and dwellings are thoroughly cleaned, what made the Songkran New Year Festival known worldwide are the phenomenal water battles.

Songkran goes (usually) over three days, (in some provinces also longer), with the Thai on the first day traditionally clean their homes. On the second day, people prepare food for the Buddhist ceremonies on New Year's Day. On the third day, many Thai people visit the temples with their prepared food and give the monks food and other gifts. In the temples the Buddha statues are drizzled with water, this traditional custom happens in the hope that the new year will bring good luck.

In many temples chedis are built of sand. The original chedis are large towers, similar to a bell with a tapered cone, symbolizing a place of worship. During the Songkran festival, many believers bring sand into the temples and build sand chedis. These are usually rather inconspicuous and simple, they symbolize the return of the sand in the temples, which was carried by the visitors throughout the year, the sand returns symbolically back to the place of origin. The sand chedis are often decorated with colorful little flags and flowers.

The Songkran New Year Festival means the Thai as a respect statement to older people and the family members. It is the custom of the younger water to pour into the hands of their parents and grandparents, they give them gifts and show their gratitude. The elders give their blessings to the younger ones. The custom symbolically includes washing away all the mishaps of the past year and positively welcoming the new year. There is a lot of festivals on the streets, the spirit of the New Year is celebrated by locals and tourists alike, and water battles have developed over the years.

The New Year's greeting in Thai is "Sawadee Pi Mai". Try it and you might not just get a smile back for it, but also a compliment à la "phut thai gkeng" (you speak Thai well).

Alcohol is consumed excessively at Songkran, causing a dramatic increase in accidents every year, causing many people to be injured and killed every year. The main reason is the alcohol, which has fatal consequences, especially in road traffic, and among the victims are many motorcyclists.

Where is the party? 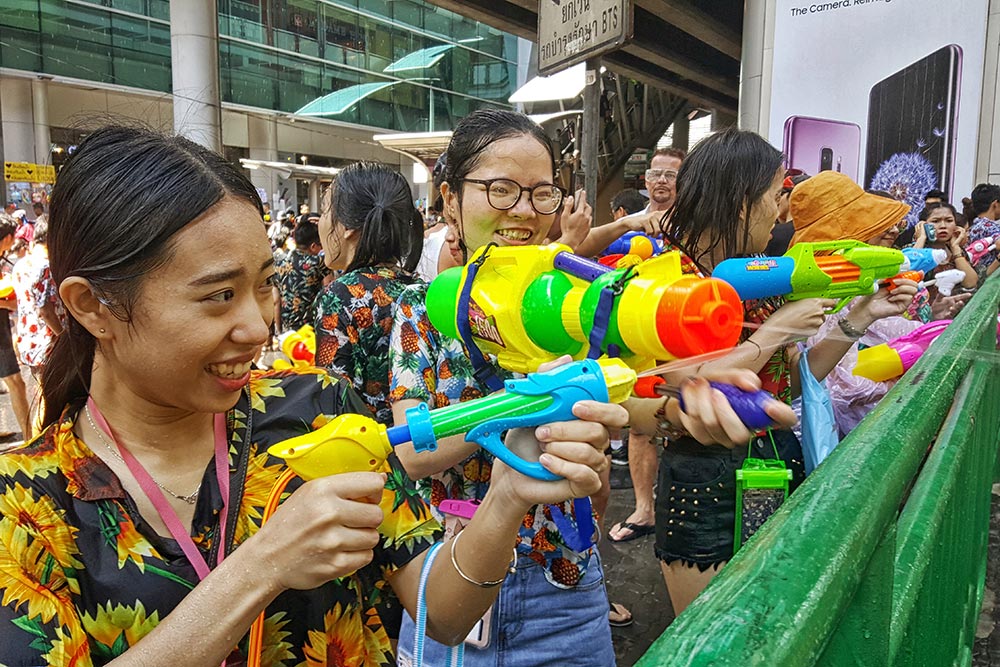 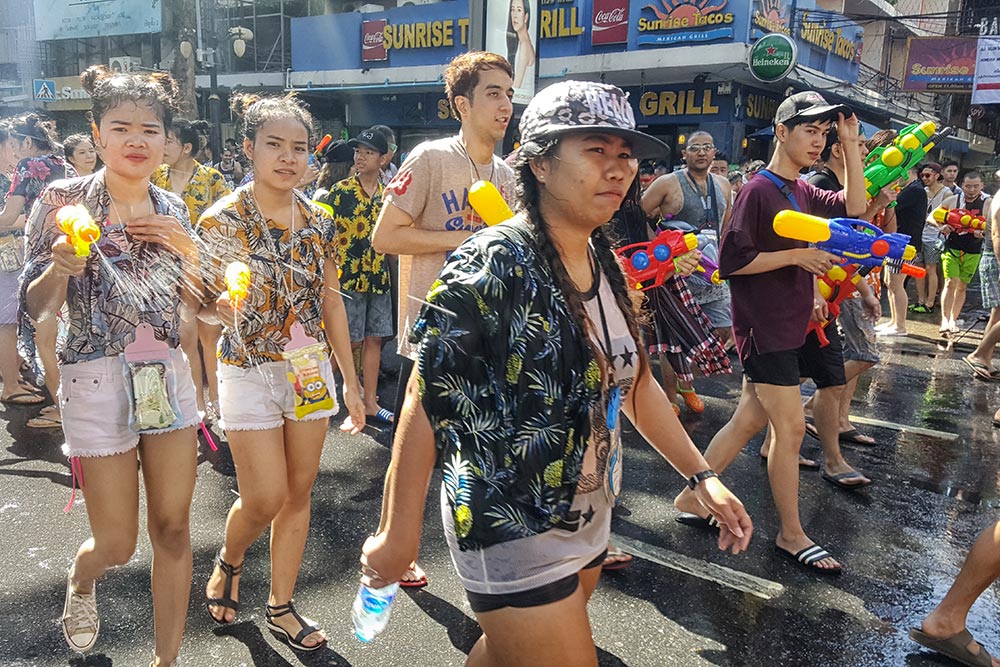 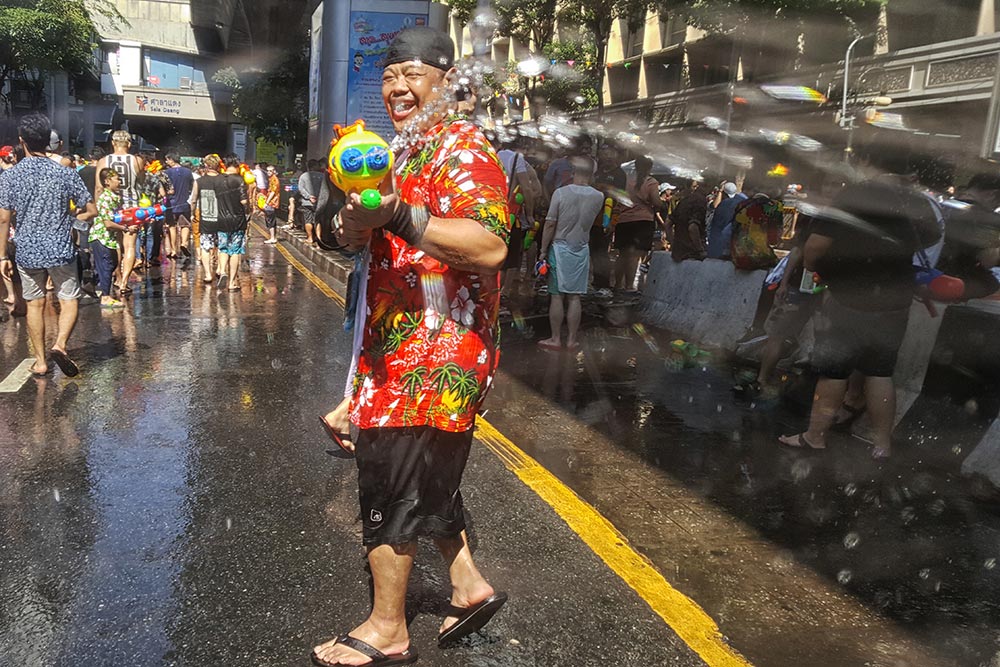 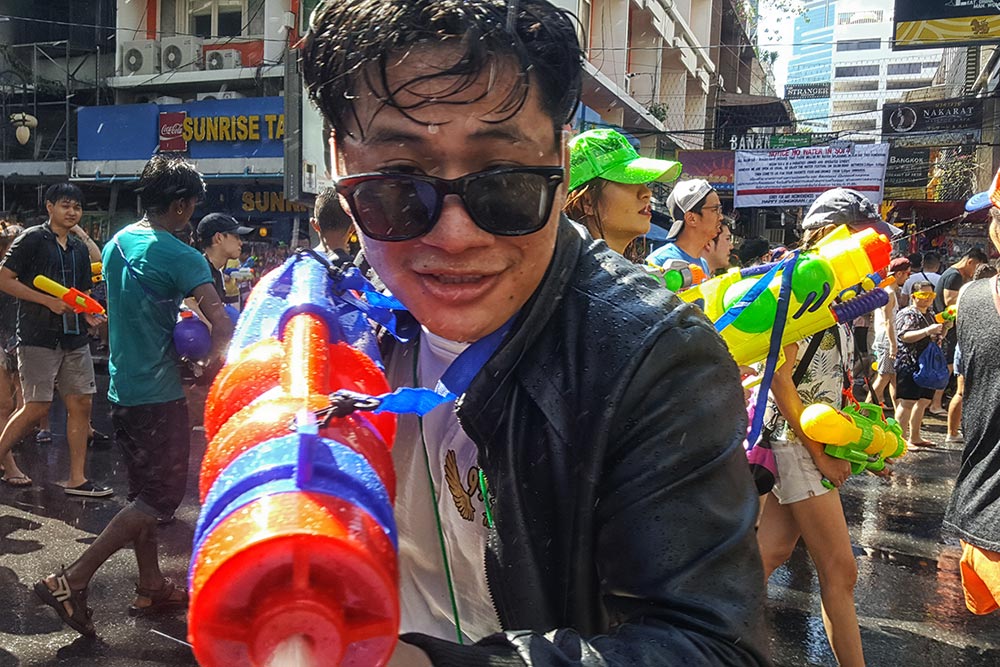 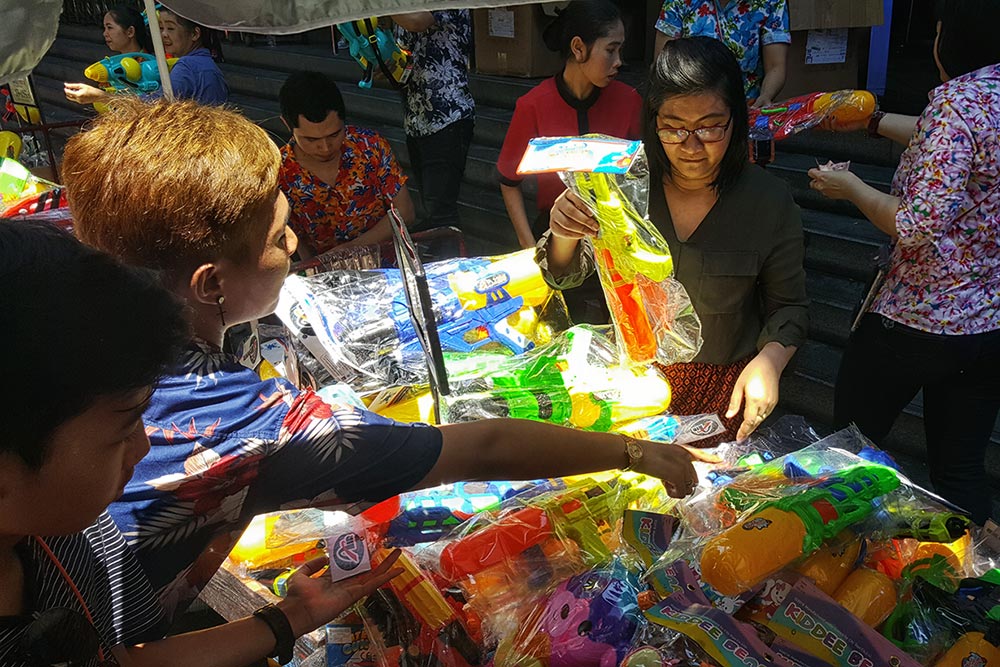 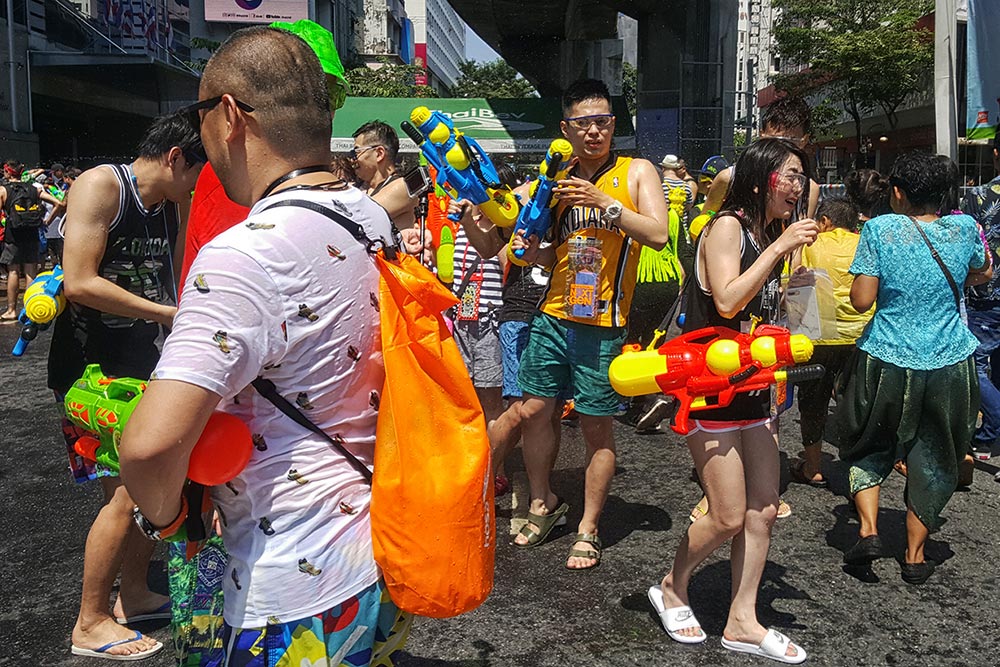 What is appropriate?
### since many people drive with alcohol, should keep their eyes open on the road ### especially valuable things at home, everything else that you carry with you best kept in a waterproof plastic bag ### book hotel accommodations in advance ###
What is inappropriate?
### Do not throw water at monks, children and the elderly ### Do not take anything with you, which should not get wet ### every year there are injuries and deaths, the main cause is excessive alcohol consumption, do not exaggerate! ###
Tip
Protective goggles definitely make sense! Everyone celebrates hilariously and the water from the waterguns comes from all directions. It quickly happens that you can inadvertently get water in your face and thus in the eyes. With goggles you are in the right place.
Surprise!
The water that you get for refilling at Silom Road, for example, is usually cold as ice. The surprise, if one hits because of a jet of water, is thereby increased again.
Color powder & baby powder
During the Songkran Festival, not only water will be used extensively, but also color powder and baby powder will be used. As mentioned several times before, the tradition of the Songkran Festival is symbolically linked to the cleansing and release of the old year's worries, to start the new year well. The use of baby powder symbolizes a lot of offspring, so that the future is protected in old age.
Clothes
After all, not surprisingly, the correct clothes. Again, less is more. This is not meant to be naked, but to look for comfortable clothes. Long flowing clothes stick to the body as soon as you get wet. The other things do, t-shirt, shorts, swimsuit or bikini have proven under it. Light footwear, flip flops for example.
Move around
Songkran is celebrated in many places, where people starts in dry clothes, and after the fun going back home in wet clothes is another point. Sounds banal, it is partly not, because for example, not every taxi driver wants to go to the big sites, because the traffic there usually brings congestion. Likewise, some taxi drivers do not value guests wearing wet clothes. That's easier with the Tuk Tuk.
ID required?
Thai law requires visitors to carry sufficient identification papers at all times. These must be presented at the request of a police officer or government representative. Many tourists confuse this obligation to pass with the need to have the original passport with them at all times. It is not so. Copies are sufficient for a first inspection and proof of one's own identity and are generally accepted.
Your experiences
Did you visit the Songkran Festival and did you get some more experiences or saw something great? You can tell us your experiences or if you want, you can even write your own blog! 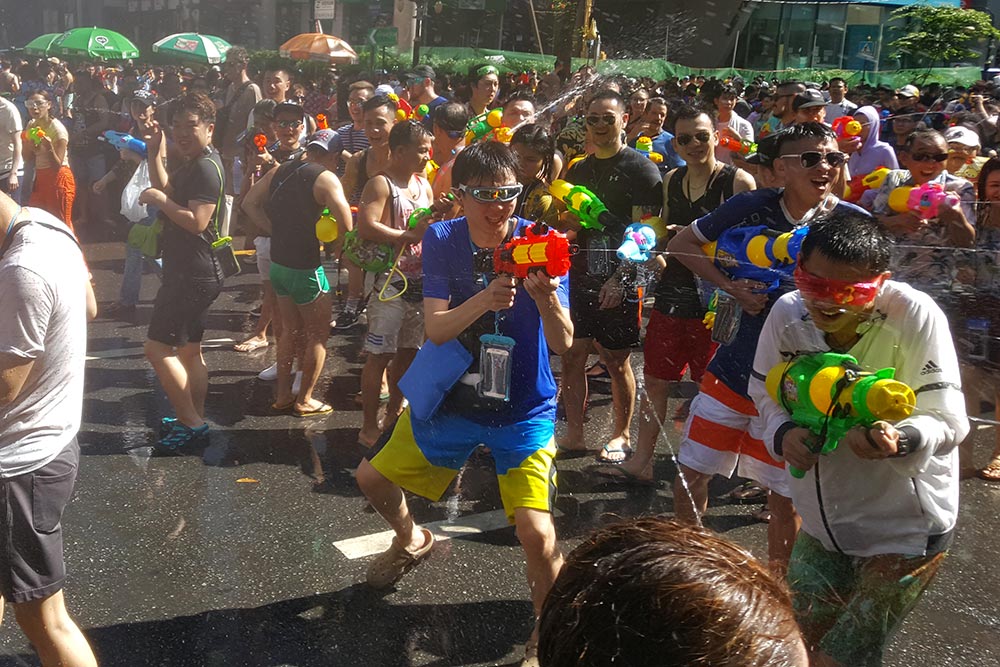 On Silom Road takes place the largest water battle and it starts more or less at the BTS station Sala Daeng. At least here you get the first showers. Silom Road is closed on both lanes to the next major intersection for pedestrians. On the approximately 1km long section, thousands of people have only one thing in mind: fun! If you have not bought a water pistol or water fountain before, you will quickly find it here along the road at many stalls.

Something disillusionment experienced those who join the spectacle for the first time, because: the water is not free. The first tank filling is still free, if you have bought the Wassergun, otherwise you pay depending on the size of the tank of watergun 10 to 20 baht per filling! 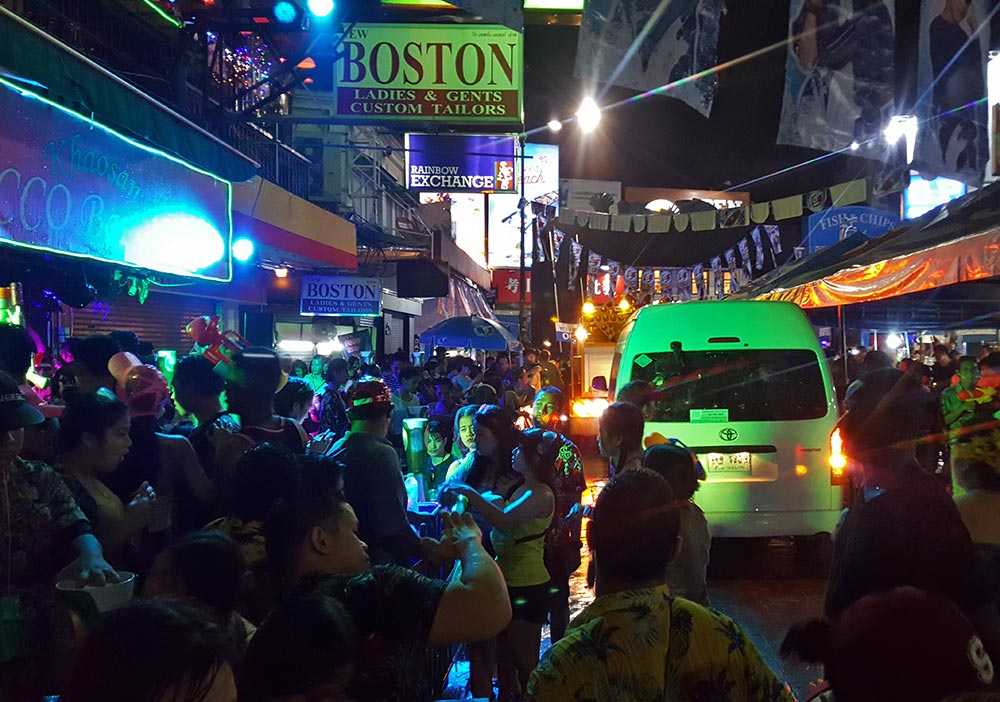 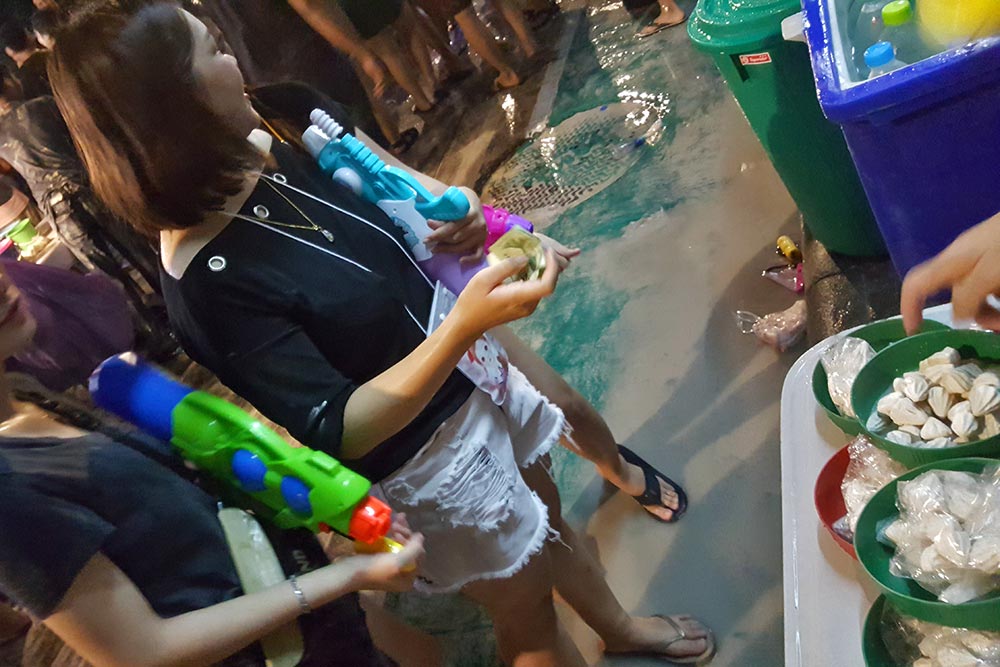 Also in the Khao San Road water is omnipresent. You are in a wild party, soaked from head to toe, as soon as you enter the street it will not be long before you are part of the water battles. In addition to the Khao San Road, the party is also on the streets around, for example, on the Thanon Tanao. Many visitors flock in bulk from one of these junctions and want to participate in the spectacle. So there are at one point or another also controls, or passages with barriers, wherever the visitors are always passed by in groups.

In addition to many bars where you can watch the hustle and bustle, there are many stalls to buy everything you need for a successful party. On the Khao San Road is also a lot of lubrication, you can buy (pressed) baby powder, mix it with water and then just go on it, others lubricate the mud wrap in the face or on the arms. Of course, please be careful not to overdo it, nice and slow, so that literally nothing comes into the eye. 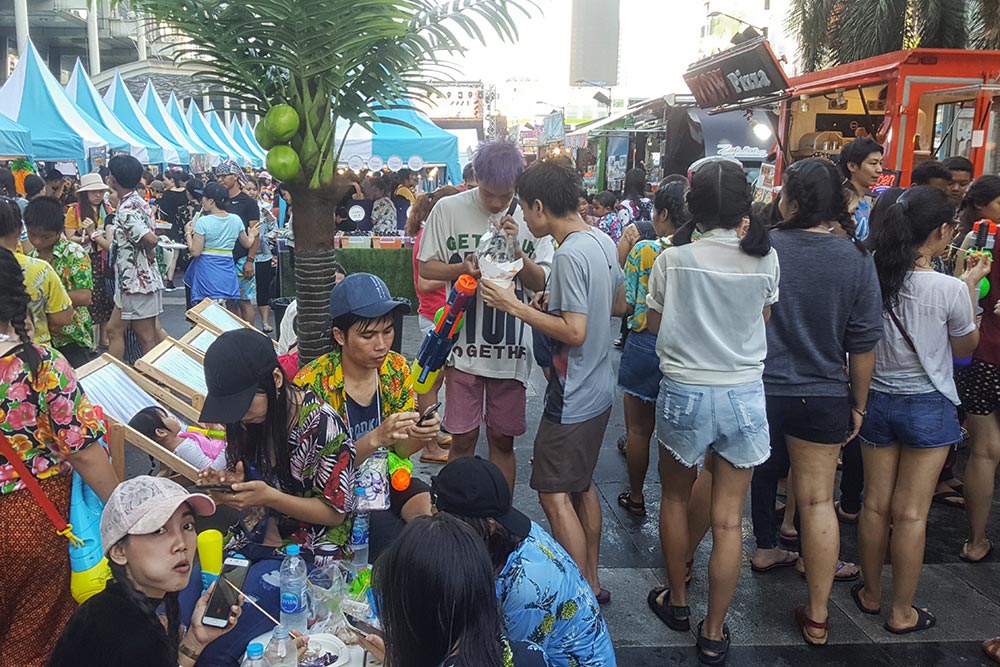 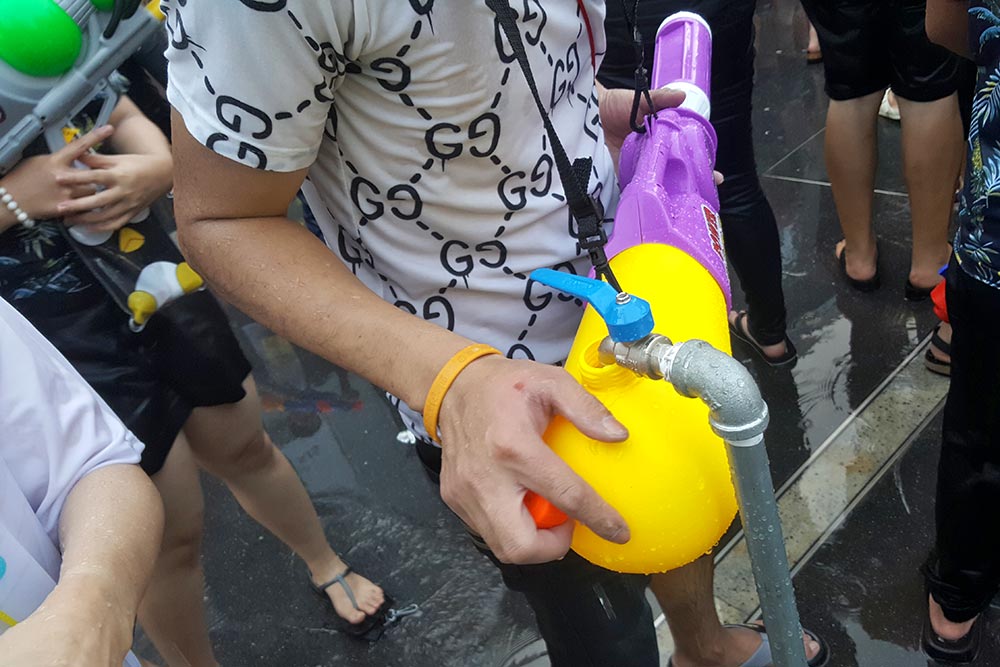 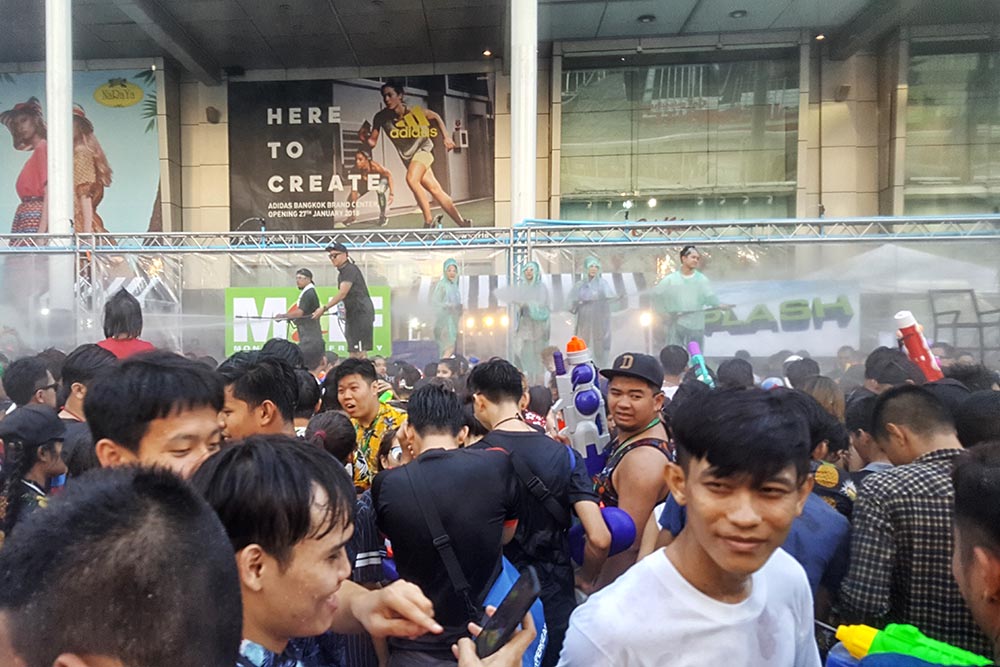 Centralworld has perhaps already been known as a shopping mall, right outside the gates of Centralworld a mega-party takes place that shines with diversity and atmosphere! The way to the party is very easy, it is best to drive to the BTS station Siam, from there it is only a few hundred meters on foot. On the way to the forecourt, of course, you will be greeted warmly by others with their water pistols.

But beware. Still some shopping addicts get lost who have "completely forgotten" that now is Songkran Festival, not everyone thanks you for the shower near the BTS station, best of all you are you are in the square or you are watching exactly who you want to get wet. The bustle then changes abruptly when you come to the square in front of the Centralworld Mall, there are thousands of people who want to have fun and spread fun.

The nice thing is that at the beginning you can go into a kind of "neutral zone". Here you will find many stalls with food and drink. So you can strengthen yourself again before you can start. From here starts the fun and then takes place in more or less two large squares. In the first place, the spectacle actually begins. There are water stations with free water to refill and if you are lucky, heat the organizers here with high-pressure cleaners the mood. But do not worry, the devices are set so that they do not hurt, but spray a spray. That's so awesome, so a car in the car wash must feel!

On the adjacent square it gets hot and you need time and patience, until you make it, if you manage to rummage through there. Because this is where the very popular foam battle takes place. There is also a music stage where the mood is properly fueled. The waiting time was too long for us to fight through the Battle of the Foam, there were just too many people there who had the same wish, so unfortunately no photo. 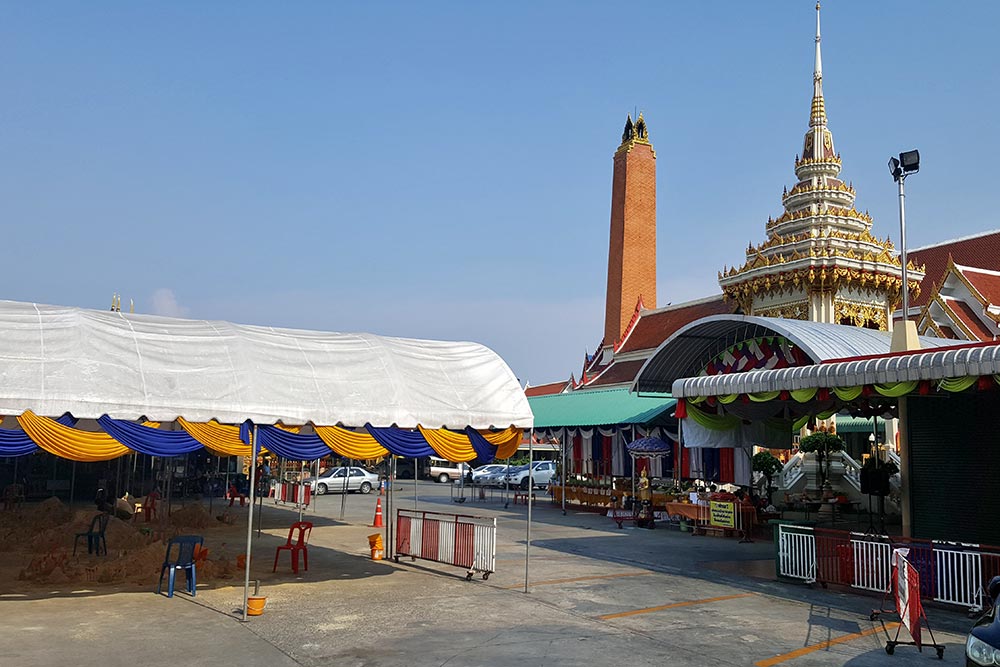 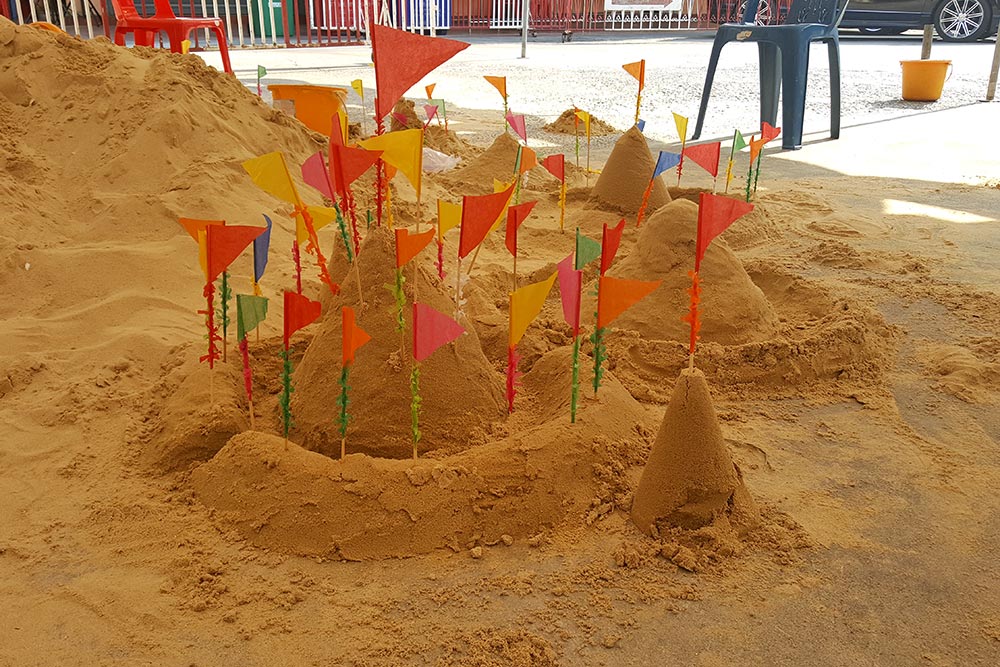 At many temples in Bangkok you can also see chedis, which are bell-shaped towers within the temple complex. At the Songkran New Year Festival, sand-pit chides are being formed in many places on many temples.